With few connections in the film business and limited experience in feature film production, we set out, like countless others, to make a movie and begin our careers in Hollywood. 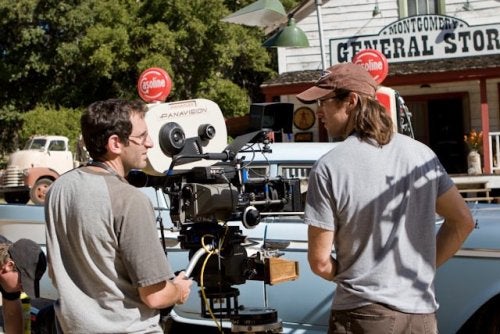 If we knew what we were in for prior to beginning the process, we might not have ever survived it. Based on sheer guts, a little luck, a dash of naivety and a whole lot of heart, we began our adventure into the craziness of independent filmmaking.

The first step was looking for the coveted material that would be our ticket to success. Our first ascent was reached when we came across a script titled "Boy in the Box" written by Glenn Taranto. (We renamed it "Stolen" for our film.) A heart-breaking mystery-thriller about two fathers who lose their sons was the type of page-turning material that turned our heads and fueled our passions into taking the next step on our long journey.

We knew that in order for us to overcome our anonymity as filmmakers, we needed a script that had the potential for deep character development that would attract strong talent.

So we loaded our arsenal with as much depth and breadth as we could muster and then sent it off to the best actor that was within six degrees of separation from us.

Enter Josh Lucas, the "Sweet Home Alabama" star with a million-dollar smile and priceless baby blues. A colleague of ours had met Josh a few weeks earlier about a film he was working on, so we asked if he would send Josh our script.

Luck was on our side: Josh responded quickly and, within days, we were giving it all we had to convince Josh that this movie was for him.

In the days leading up to this pitch, we discussed what was necessary in order for first-time filmmakers like us to convince someone like Josh to trust in the vision we had for the film without having any prior work to show him. Our only bet was to assemble a montage of images from photos, paintings and movies, combine it with music we thought would represent the score, and then cross our fingers that Josh would believe in our vision and our ability to deliver.

Seeing that we were serious about this process and determined to get this film made, Josh gave us the thumbs up, extending our film lives another day.

That simple display of acceptance from one talented actor put us on the fast track to getting our film made.

At this point, we figured our luck was pretty much used up, since we now possessed a strong script and a great actor. Everything else would be a cherry on top. Little did we suspect that we would end up getting sprinkles, chocolate sauce, more ice cream, more sprinkles and whipped cream.

The cast we were able to assemble was beyond our wildest dreams.

Jon Hamm, James Van Der Beek, Rhona Mitra, Morena Baccarin, Jimmy Bennett … Even a blockbuster studio pic would be lucky to assemble such a cast, yet those are the actors we had going into production.

Our excitement was at an all-time high as we started production, but with that excitement came an insane amount of stress when filming began.

How do you host some of the most talented actors in the business with a shooting schedule that doesn’t even leave enough room for introductions? That was our challenge.

As first-timers, we knew at this point that any downfall of our film would not be because of our actors, but because of us as filmmakers.

A smooth production would free us to be as creative as possible and survive this amazingly tight shooting schedule. Anything less than smooth could mean huge disaster for us and for the film.

When a wildfire in the mountains of Thousand Oaks took away one of our best locations on the first morning we were scheduled to shoot, we thought our movie was falling on tough times production-wise.

When the unions came and we lost a day in negotiations, we thought we had it pretty rough.

When another, larger production kicked us out of a key location, we thought life was being mean, but not yet cruel.

But when equipment stopped working, cars stopped running, generators started blowing and cameras stopped rolling, we knew that to survive the black hole of production meltdown, we had to flip on our inner “Terminator mode” and brace ourselves for the rapture. 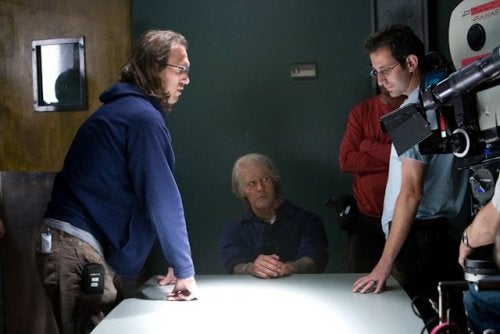 Fortunately, our actors were more than understanding and amazingly focused. It soon became a routine where we’d block the scene, set up the shot, make any final adjustments and then, right before we’d roll, wait for the production gnomes to play their tricks on us.

Thankfully our sheer will and determination to get the movie in the can could not be suppressed by these little production tyrants.

“That which doesn’t kill you makes you stronger” could never be more true than it was for us throughout this production. On the last day of shooting, we had a long drive back to base camp; it was at that moment that we realized what we had accomplished.

Unfortunately, the toll of it all kept both of us out of commission for about three weeks while we got our lives back together and slept just enough to make the dark circles and forehead creases just a little less obvious.

We figured four months in the editing room would be plenty of time to lock picture and get our movie out to the world.

Nothing on the film was neutral; it was either the greatest thing to ever happen or the worst.

The only thing that saved us was that this was our first feature and we believed this was our hazing period from the production gods to see if we had what it takes.

Being at the point now where we have distanced ourselves from the emotional toll of making this film, we are impressed with what we see on screen, especially knowing how much adversity we faced. Even more exciting is seeing audiences respond to the film and hearing them say, “That was great! What’s next for you guys?”

With that compliment of wanting to see more from us, we both know that we have taken our first step toward a career in an industry that demands respect for the process and the craft.

If you are two dudes and you have a dream of making a film, you can do it, even if you have no connections in this beautiful and challenging industry.

("Stolen" is available nationwide on video-on-demand via IFC. It opens Friday at the Clearview Chelsea in New York and on March 19 at the Laemmle Sunset 5 in Los Angeles.)

BIO Anders Anderson & Andy Steinman
Director-producer Anders Anderson came to L.A. from his native Cincinnati in 2001 as an actor. While attending the Playhouse West Repertory School, he started production company Rileyboy Films, focusing on short films and documentaries; Rileyboy made 10 productions in three years. Finding his focus as a producer and director, Anderson teamed up with Andy Steinman, a producer and director of photography, to form A2 Entertainment Group. Steinman earned a degree in film studies at UC Santa Barbara and a masters in cinematography from the American Film Institute. After shooting several features, he found he wanted to produce. Steinman produced and shot "Stolen" under the A2 Entertainment Group banner.

Director-producer Anders Anderson came to L.A. from his native Cincinnati in 2001 as an actor. While attending the Playhouse West Repertory School, he started production company Rileyboy Films, focusing on short films and documentaries; Rileyboy made 10 productions in three years. Finding his focus as a producer and director, Anderson teamed up with Andy Steinman, a producer and director of photography, to form A2 Entertainment Group. Steinman earned a degree in film studies at UC Santa Barbara and a masters in cinematography from the American Film Institute. After shooting several features, he found he wanted to produce. Steinman produced and shot "Stolen" under the A2 Entertainment Group banner.
x
Looks like you're enjoying reading