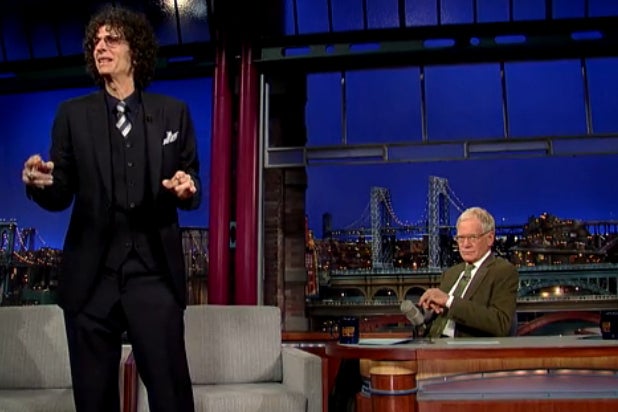 Howard Stern’s mind was blown when he heard that David Letterman and Jay Leno kissed and made up.

Or at least, made up.

On “The Tonight Show” Nov. 1, Leno told Bravo’s Andy Cohen that despite media reports, he and Letterman are actually friendly and even talked on the phone recently.

See video: Jay Leno on David Letterman: We Like Each Other, ‘He Still Makes Me Laugh’

Stern could not — and would not — believe the reconciliation, at least until he got the news straight from the horse’s mouth. Stern heard the evidence on Friday’s “Late Show.”

“We have spoken on the phone, yes,” Letterman admitted.

Stern felt betrayed by his longtime friend. Apparently he had also been feeling like a literal soldier in the late night war: “I feel like a Vietnam veteran. Like I’m still in the jungles fighting your war … and you’ve made up with Vietnam,” the “America’s Got Talent” judge said.

For his part, Letterman just sat there quietly, appearing uncomfortable and perhaps even unhappy about the conversation.

“Mind you, I work for NBC television now and I’m not speaking to Jay Leno,” Stern continued, rising from the guest chair for emphasis. “They asked me to go on his show, I go, ‘No — he did Dave wrong.'”