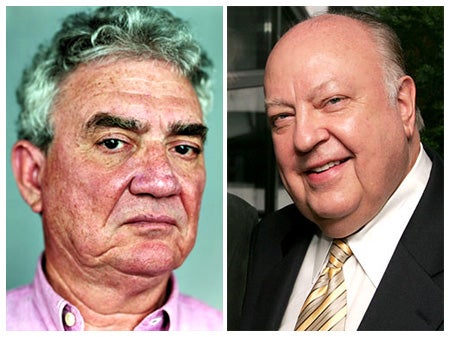 In it, Raines criticizes the media for not “blowing the whistle” on the Fox News chief (above, right) for “using the network to conduct a propaganda campaign against the Obama administration — a campaign without precedent in our modern political history.” His argument is tied to healthcare reform.

"Many members of my profession seem to stand by in silence as Ailes tears up the rulebook that served this country well as we covered the major stories of the past three generations, from the civil rights revolution to Watergate to the Wall Street scandals. This is not a liberal-versus-conservative issue. It is a matter of Fox turning reality on its head with, among other tactics, its endless repetition of its uber-lie: ‘The American people do not want health-care reform.’"

"For the first time since the yellow journalism of a century ago, the United States has a major news organization devoted to the promotion of one political party. And let no one be misled by occasional spurts of criticism of the GOP on Fox. In a bygone era of fact-based commentary typified, left to right, by my late colleagues Scotty Reston and Bill Safire, these deceptions would have been given their proper label: disinformation."

Not surprisingly, Raines’ rant is causing a bit of a stir in Washington and New York media circles.

Fox News quickly responded on Friday. Via a network spokesperson:

“We find it ironic that Howell is dispensing advice to other journalists after he nearly single handedly destroyed the journalistic credibility of the New York Times.”

That, of course, refers to the Jayson Blair plagiarism scandal, over which Raines resigned in 2003.

News Corp. – which owns Fox — has been a frequent target for Raines. His first column as a contributor to Condé Nast Portfolio. was an essay about how a Rupert Murdoch-owned New York Times would ultimately destroy the paper.

More to come on this, I’m sure.