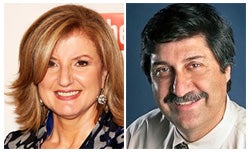 The Huffington Post is losing the editor of its Investigative Fund.

In a coup that was trumpeted by Arianna at the time, Larry Roberts was hired away from the Washington Post last year to launch the nonprofit journalism vertical for HuffPo; now he’s returning to “mainstream” media as the head of Bloomberg News’ Washington Finance team.

Here’s his memo via Gawker:

Folks: I want to let you know officially that I’ll be moving on. I’ve accepted an editing job with Bloomberg News, as leader of its Washington Finance team covering the reform of the financial system.

I make this change with much excitement, but I will miss the extraordinary team at the Investigative Fund that has accomplished so much since we opened for business last fall. Your excellent investigative work on the financial crisis and health care, the elegant video documentaries, the fruitful forays into multimedia and citizen journalism — all that has quieted the skeptics about nonprofit journalism and exceeded my hopes for what could be done in the first year.

But now that the startup is started up, it’s as good a time as any for me to make a change.

I know all of you will continue to make a great success out of this venture and your future careers. I will be watching and cheering from the sidelines — just a few blocks away.

With deepest respect and affection,

Gawker founder Nick Denton had an interesting comment about the move:

"All web media outlets suffer from the same dilemma. We all want to take up the torch of real journalism. But that ambition often clashes with the interests of the audience and the economics of web publishing. The readers may think the exposure of corruption in Baghdad or the California mortgage market is a good thing; but they don’t click."