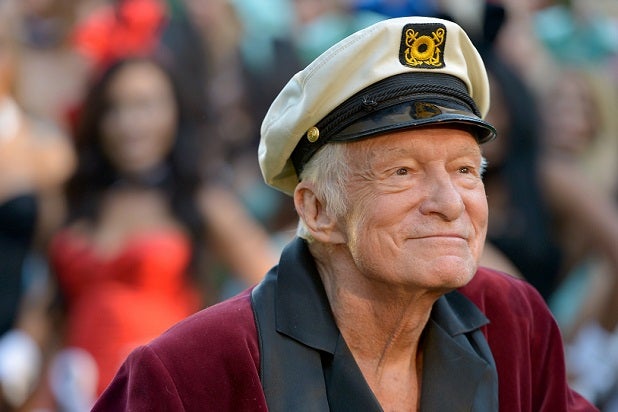 The 13-episode season will combine archival footage, interviews and cinematic reenactments to tell the tale of the “Playboy” magazine founder and his impact on global culture and history. It will premiere next year in the U.S., U.K., Germany, Austria and Japan.

“American Playboy: The Hugh Hefner Story” begins in post-war America, taking viewers through the 1953 launch of “Playboy” magazine. It will cover the next six decades of Hef’s life and career, as the target of the conservative movement spoke out for social justice and civil rights, battling along the way with the FBI and J. Edgar Hoover.

Producers received access to more than 17,000 hours of never-before-seen footage from the Playboy archives, and to Hefner’s personal scrapbooks. The 90-year-old icon also offered up some stories for the first time ever, Amazon said.

“Although Hugh Hefner is an iconic figure known worldwide, most people may not be aware of the impact he has had on some of this country’s most important social revolutions,” said Conrad Riggs, head of Unscripted, Amazon Studios. “We are excited to bring Prime members the untold story of Mr. Hefner’s remarkable life and his contributions to modern American history.”

“It has been a long road in finding the right partners to tell the full story of Playboy as it has unfolded over these past 63 years, and I believe we have found them in the collaborative team of Stephen David Entertainment and Amazon,” said Hefner. “I’m pleased that this docuseries will shed light on what has been an incredible journey and the voice Playboy has had in the discussion of our ever-changing culture. Just as importantly, my hope is that it will inspire others to pursue their dreams.”

“To say that Hugh Hefner has lived a ‘full life’ is an incredible understatement,” said Stephen David, executive producer and president of Stephen David Entertainment. “Hefner created more than a magazine–Playboy became a thrilling lifestyle, one that Hef has embodied for the better half of a century. Bringing Hef’s world to life has been an adventure for SDE, and we cannot wait to share it with Prime members.”