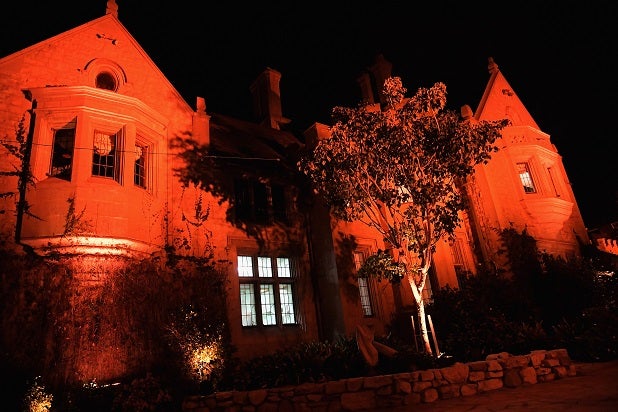 Playboy founder Hugh Hefner, who died Wednesday at age 91, left behind not just a publishing empire but an iconic piece of Los Angeles property, in the form of the fabled Playboy Mansion.

With Hef moving on to the Great Grotto in the Sky, what happens now to the mansion, the site of numerous celebrity-studded parties as well as the location from which Hefner oversaw his girlie-mag empire?

The property, which Hefner had resided in since 1971, was purchased for $100 million in August 2016 by Hefner’s neighbor Daren Metropoulos, previously the co-owner and co-CEO of Pabst Brewing Company, and current co-owner of Hostess Brands.

As part of the deal, however, Hefner was allowed to live in the mansion, located in the Holmby Hills area of Los Angeles, for the remainder of his life. According to the Los Angeles Times, Playboy Enterprises agreed to lease the property from Metropoulos for $1 million a year.

A spokesperson for Metropoulos declined to answer TheWrap’s request for information regarding if or when the Hostess honcho planned to take up residence in the mansion, or what renovations he had in the works, noting that Metropoulos’ “thoughts are with Mr. Hefner’s family right now.”

Metropoulos did issue a statement on Hefner’s passing, noting, “Hugh Hefner was a visionary in business, a giant in media and an iconic figure of pop culture whose legacy will leave a lasting impact. I was fortunate to know him as a neighbor and friend and I extend my deepest sympathies to his family.”

However, an announcement of the purchase last year laid out a detailed plan for the mansion’s future. The announcement noted that Metropoulos intended to connect the mansion with his property next door, which he purchased in 2009, to create a 7.3 acre compound.

“I feel fortunate and privileged to now own a one-of-a-kind piece of history and art,” Metropoulos added. “I look forward to eventually rejoining the two estates and enjoying this beautiful property as my private residence for years to come.”

Beyond connecting the two properties, which according to the Times were both designed by Arthur R. Kelly, it doesn’t appear that Metropoulos plans drastic renovations to the mansion. The Twinkie mogul went on at length about the mansion’s design and heritage following the purchase.

“For the last 45 years, Mr. Hefner has imbued the estate with a rich and storied legacy,” Metropoulos said in a statement. “The property’s heritage is not only that of a famous address; it is a true masterpiece in design, constructed by a noted architect for a family who played an important role in the development of Los Angeles in the early 20th century.”

Given the presumed decades of decadence that the mansion has been witness to, Metropoulos might want to have a cleaning crew go through the place before he moves in, though.