It turns out Dr. House may have minored in marketing.

Fox tonight is officially taking the wraps off details behind its months-long viral marketing campaign for the new season of "House."

The network officially confirming that those Snakes on a Cane messages that have been popping up all over the Internet and in wild street postings are in fact part of a tune-in campaign for the network’s hit medical drama. 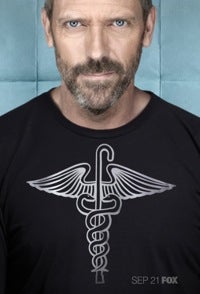 Tonight, the network revealed the first image of Hugh Laurie wearing a t-shirt featuring the snakes on a cane logo.

The picture is the first time Fox has copped to connection between Laurie’s character and the caduceus-themed campaign, even though many fans had figured out the mystery a while back.

But here’s the biggest reveal: According to Fox marketing chief Joe Earley, the snakes on a cane campaign was the brainchild of Laurie.

"I got a call months ago from (‘House’ executive producer) Katie Jacobs, and she told me Hugh had come up with this idea," Earley told TheWrap.

Laurie had been mulling some images in his head and one day decided to sketch a version of the classic medical symbol, the caduceus.

Except in Laurie’s head, the staff was replaced with a cane, much like the one his character on "House" uses.

"That one change instantly connected the image to ‘House’," Earley said. "It was so striking."

Earley and his team were so psyched by the imagery, they began plotting a way to turn it into a promotion for the show. Thus was born the Snakes on a Cane viral campaign, which has been quietly unfolding since late spring.

Starting in May, Fox began hiring street teams to hand out temporary tattoos with the SOC image in major cities such as LA, New York and Chicago. The network also enlisted "House" producer Universal Media Studios in its plans: The studio got NBC to begin handing out the tattoos to customers who shopped at the NBC U store in New York or online.

"If you bought something at the NBC store, this image just quietly showed up in your bag," Earley said. "We handed out something like 20,000 of the tattoos through NBC alone."

Fox then launched a website — snakesonacane.com — that featured the SOC image but no mention of "House." In recent days, the site began hosting a clock that counts down to the season premiere of "House" on Sept. 21 (even though there’s no mention of the show on the site).

To add to the whole subliminal messaging idea, Fox even began airing five second teaser spots build around an animation of the SOC symbol. But the network made sure never to run the spots during "House."

In recent days, the on-air spots and online imagery began including a peek at Laurie’s chin. An ad ran in Entertainment Weekly. TV critics were sent SOC t-shirts (but without any explanation, resulting in some comical media Twitter banter).

But not until tonight did Fox show off the full Hugh.

"There was nothing really budgeted for this campaign for the summer," Earley said. "So we had to be very creative and efficient in how we got impressions. We didn’t want to take away any (money) from the actual season six launch campaign. So what we’ve done is come up with a grass roots campaign that very efficiently engages viewers from the ground up."

Indeed, it’s unusual for a network to soak so much energy into a six-year-old show. But Earley said Laurie’s idea inspired his executives.

"We could have just put on ‘ "House" Returns’ ads, but this was much more fun," he said. "This whole campaign was done because it was a great idea. It got everyone in the company engaged… and it was a challenge."

But even as the show’s premiere date draws closer, look for Fox to continue with the SOC theme.

In the days leading up to the "House" premiere, Fox plans to have vintage ambulances drive around LA and New York, handing out the SOC tattoos. And two weeks before the Sept. 21 season premiere, on Sept. 7, Earley said Fox will unveil "a really fantastic visual image" featuring Laurie that will tie together the whole campaign.

Here’s video of the reveal: