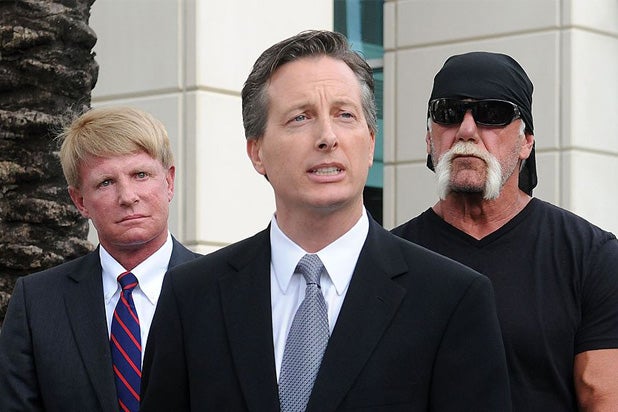 Hulk Hogan’s attorneys may have already taken down Gawker, but one of the WWE legend’s lawyers isn’t done with the Gizmodo family just yet.

Charles J. Harder filed a defamation suit against Jezebel on Thursday for referring to therapy group Superstar Machine as a “cult,” according to the document obtained by TheWrap. The female-focused online magazine also wrote that Superstar leader Gregory “International” Scherick “preyed on insecure women and controlled their lives.”

The May 2016 feature was titled, “Inside Superstar Machine, Which Ex-Members Say Is a Cult Preying on New York’s Creative Women” — and it had more damning details in the many paragraphs that followed. Yes, it gets gross.

For the piece, Jezebel writer Anna Merlan interviewed multiple women who claimed to be former members of Superstar Machine, an odd group that went through several iterations. According to her expose, those sources “all say Scherick has cultivated a group of women who served as his seconds-in-command, and whose role is to praise him, back up his decisions, and remind everyone coming into the group that they needed to give him ‘a good experience.'”

“Part of the broader emphasis, they say, was on ‘serving the masculine,'” the story adds.

This is going exactly where you think it is. Oh yes, and Scherick claims to be a mouthpiece for “The Divine,” if readers can believe that.

At the alleged cult’s top levels — heights one had to pay hundreds of dollars a month (or more) to reach — there were afterparties following certain therapy sessions, Jezebel wrote.

Those exclusive meetings were “entirely sex-based,” per one ex-member. “He would ask women to talk about their relationships, their sex lives, what they’d do with their boyfriends.”

That line of conversation was corroborated by another ex-member.

Scherick told women “to do stuff like get down on the floor,” this second source said, or “stick fingers up their asses, or stick, like, a carrot up your ass.”

Read the full Jezebel story here. Harder did not immediately respond to TheWrap‘s requests for comment on the suit.

“This case is nothing more than another obvious attempt by Charles Harder to intimidate journalists,” a spokesperson for Gizmodo Media Group, Jezebel’s parent company, said in a statement on Thursday. “​The story in question was published on May 10, 2016 — months before our acquisition of certain Gawker Media assets, including Jezebel. Any litigation over the story should have been brought against Gawker Media in bankruptcy court — not against Gizmodo Media Group or the individual writers. We believe this suit is meritless and we plan to contest it vigorously.”

Scherick is suing Merlan and former Jezebel editor-in-chief Emma Carmichael, who the lawsuit noted was the managing editor of Gawker.com when it published Hulk Hogan’s secretly recorded sex tape, according to the document obtained by TheWrap. This new suit also lists Gizmodo Media Group, which currently owns Jezebel and other Gawker entities, as a defendant.

Harder represented Hogan, known legally as Terry Bollea, at a defamation trial against Gawker for publishing his sex tape. Bollea was awarded $140 million, which forced Gawker.com to shut down. It was later revealed that Peter Thiel financed that lawsuit, though no such connection with this one has been made to the billionaire — yet.