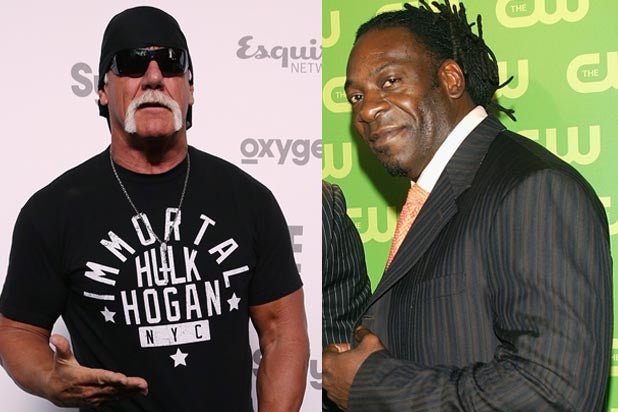 “It’s 2015 and the N-word should be eradicated from the English language in my opinion,” Booker T, real name Booker Tio Huffman Jr., wrote on Twitter Friday. “I am shocked by the statements made by Hulk Hogan. It’s unfortunate, but that’s something that he’s going to have to deal with.”

The African-American wrestler’s comments come after audio has surfaced of Hogan dropping the racial slur in multiple circumstances. Although Hogan has apologized for using the offensive word while discussing his daughter Brooke Hogan’s dating life “during a conversation” caught on camera eight years ago, he also questioned in a 2012 radio interview why Booker T could use it and he could not.

“Well, Booker T used to do that to me, and every time I pull up YouTube there’s that famous thing with Booker T and his brother is there and they’re all talking trash, and Booker T says, ‘I’m coming for ya Hogan, you ni-er’ — and not ‘ni-a,’ he goes ‘ni-r,'” Hogan said.

Booker T said on Friday that he regrets using the racial epithet during the segment Hogan referenced.

20 years ago I made a huge mistake by saying something I shouldn’t have on National TV.

In a 2011 interview, Booker T calls the comment captured in a 1997 WCW promo his “most embarrassing moment.”

“I’m from the street and that’s a word that use loosely all the time in the neighborhood, and I was just intense, I was caught up in the moment and it slipped out,” Booker T explained. “I thought I was going to be totally blackballed from that. And Hulk Hogan actually came to me and told me not to feel bad about it, but said, ‘You know what? I’m a good N-word.”

Another black entertainer, actor Orlando Jones (“Sleepy Hollow,” “The Replacements”), also tweeted about Hogan’s use of the N-word — but took a significantly less serious approach.

So when he called me brother he was secretly muttering ni*&er under his breath? #WhyAreMyChildhoodHeroesSuchAssholes pic.twitter.com/uuOevISsSo

Watch Booker T’s interview explaining his accidental use of the N-word below.