Hulu has given a series order for the new mystery drama “Career Opportunities in Murder and Mayhem.”

Starring Violett Beane, Lauren Patten, Rahul Kohli, Angela Zhou, Hugo Diego Garcia, Pardis Saremi, and Mandy Patinkin, the show centers around solving a murder in a “post-fact world.” According to the logline, the murder solving will be attempted while “sailing the Mediterranean on an ocean liner filled with the wealthy and powerful.”

“Everyone on board is hiding something … but is one of them a killer? That’s what the world’s once greatest detective, Rufus Cotesworth, and his protégée aim to discover. The truth at all costs,” the logline reads. 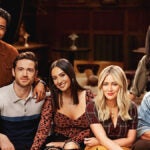 Also Read:
‘How I Met Your Father': Hulu Picks Up Comedy for Season 2

The show will span 10 hour-long episodes.

The studio for the project is ABC Signature for Hulu.

No further details were immediately available.