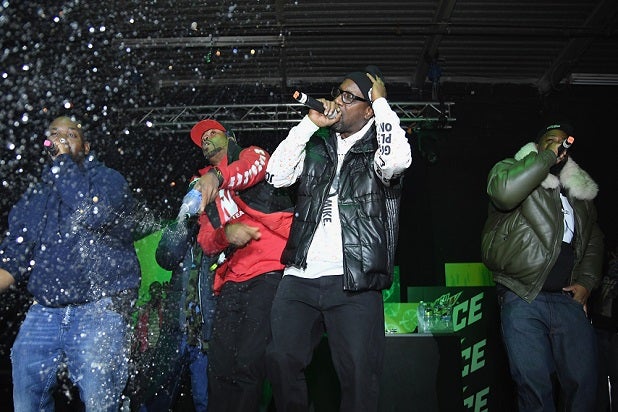 The show is created and written by Tse and RZA. Imagine Television’s Grazer and Calfo will executive producer, as will RZA, Tse, and Method Man.

RZA’s and Method Man’s fellow Wu-Tang Clan members Ghostface Killa, Inspectah Deck, Masta Killa and GZA will serve as consulting producers on the project, as will the estate of Ol’ Dirty Bastard.

“Wu-Tang: An American Saga” is inspired by RZA’s books “The Wu-Tang Manual” and “Tao of Wu,” and based on the true story of the Wu-Tang Clan. Set in early ’90s New York at the height of the crack cocaine epidemic, the show tracks the Clan’s formation, a vision of Bobby Diggs aka The RZA, who strives to unite a dozen young, black men that are torn between music and crime but eventually rise to become the unlikeliest of American success stories.

“The Wu-Tang Clan has made an immeasurable contribution to music and our popular culture,” said Craig Erwich, Hulu’s SVP of originals. “Their unique musical form and authentic storytelling continues to speak to our times. This series is a conversation worthy event that will bring their history and music to life in a way that hasn’t been seen before.”

“I’ve been a fan of Wu-Tang since the mid-90s and recognized quickly how significant Wu-Tang and The RZA were to the world of hip-hop music and culture,” Grazer said. “Over the years I’ve gotten to know RZA and it’s clear that he is the soul and storyteller of Wu-Tang. Working with RZA and Alex Tse on this series has been a highlight of my career and Hulu is the perfect partner to bring this story to a global audience.”

“It is fitting that ‘Wu-Tang: An American Saga’ is our first series to launch this new chapter as an independent production company/studio as it embodies all of the elements we look for in a story: ambition, vision, imagination, community and the power of music to transcend our lives,” added Calfo.

“I’m delighted to be partnering with Hulu and Imagine to explore the vast story of the Wuniverse. Wu-Tang through our music has always strove to inspire as we entertain. This opportunity to continue the Wu – Saga in a 10-episode series will exponentially increase our inspirational style of entertainment. In the immortal words of ODB “Wu-Tang is for the Children,” said The RZA.

“Ever since I heard “Da Mystery of Chessboxing” on the B-side maxi-cassette single of “C.R.E.A.M.” I’ve been a lifelong Wu fan.  I’ll be celebrating this by buying a pair of Clarks Wallabys,” said Tse.

“Imagine, Hulu and Wu-Tang — I’m thrilled with this collaboration. This is a major win for hip hop” said Method Man.

“I look forward to collaborating with Hulu and Imagine for the production and filming of The Wu-Tang Series,” said GZA. “This has been a long time request from fans and supporters for many years and it is long overdue. We now get to grant their wishes.”