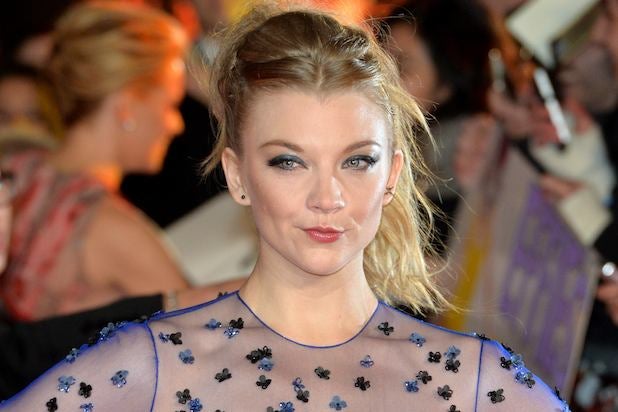 “Game of Thrones” star Natalie Dormer, who is in theaters this weekend in “The Hunger Games: Mockingjay – Part 1,” thinks more men should “absolutely” show their private parts on the hit HBO fantasy series.

“Well, during the first season Alfie, Richard, and several of the men got naked — although not all the way. I suppose it’s just the rules of broadcast television, isn’t it?” Dormer told The Daily Beast when asked if the series needed more dick. “I think ‘Thrones’ has been better than your average show with the equality, but they could definitely ramp it up! Absolutely.”

Dormer plays the power-hungry Margaery Tyrell on the series that has been criticized in the past for showing more breasts than naked men. While she doesn’t seem to particularly mind the male-female ratio of skin currently being shown, she does think “The Hunger Games” franchise is another important step toward gender “equality” in the entertainment industry.

“We want to get to a place where the gender is irrelevant, because then it’s about the personality, and about the story,” Dormer said. “I’m glad that cinema is catching up to what television has known for a while: that three-dimensional, complex women get an audience engaged as much as the men. I’m a feminist in the true sense of the word. It’s about equality.”

In the latest installment, she plays Cressida, a member of the rebellion who is also a talented director and in charge of filming Katniss in her propaganda videos against backdrops of war and tragedy.

Her definition of feminism, however, may differ from others’ interpretation of the movement.

“It really is crazy that the word ‘feminist’ can have negative connotations in 2014,” Dormer said. “It upsets me that the younger generation of women think it’s a dirty word, and associate it with a kind of militantism or a sense of female superiority. It’s not. It just means liberation, and equality.”