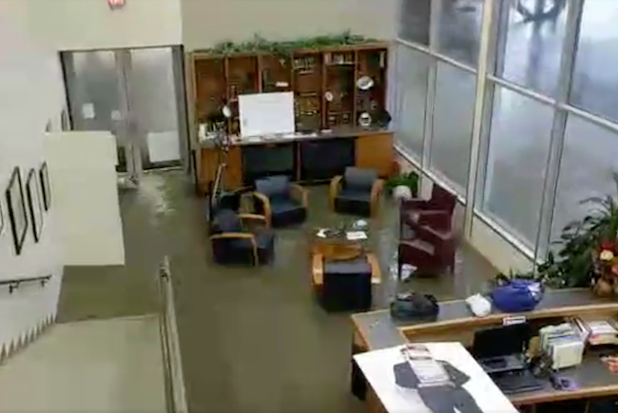 The waters are continuing to rise in Houston in the wake of Hurricane Harvey, with the National Weather Service predicting as much as 50 inches of rain in Houston and other parts of the Gulf Coast of Texas. And at the CBS Houston affiliate KHOU, reporters kept smartphone cameras rolling as they were forced to evacuate from their studio.

The water first began creeping in around 6:40 a.m. local time, forcing the news anchors and broadcast team to move upstairs. Forty minutes later, the water began pouring in, and just before 9 a.m., the team had no choice but to evacuate.

We are now moving operations to the second floor…Water is quickly coming into our building in the lobby pic.twitter.com/iJvXjF1oUP

KHOU is continuing to operate from remote locations, reporting that the city’s water supply is still currently safe to drink despite the flooding. Five deaths have been reported so far, and FEMA Administrator Brock Long told CNN’s Jake Tapper that federal disaster relief units will likely be repairing the damage in Houston and southeast Texas “for years.”

“This is a storm that the United States has not seen yet,” Long said.