“The Hurt Locker” producer Nicolas Chartier has apologized for an email that solicited votes and disparaged (though not by name) prime competitor “Avatar,” but his film isn’t out of the woods yet.

Chartier’s initial email, which went out last Friday, essentially asked for votes, in the process taking a veiled shot at its big-budget competitor.  "I just wanted to write you and say I hope you liked Hurt Locker," it began, asking that recipients who did like it tell "your friends who vote for the Oscars, tell actors, directors, crew members, art directors, special effects people, if everyone tells one or two of their friends, we will win and not a $500M film, we need independent movies to win like the movies you and I do, so if you believe The Hurt Locker is the best movie of 2010, help us! ”

Wednesday evening, the Academy confirmed that the email violated an AMPAS campaign guideline stating that “ads, mailings, websites or other forms of content” that “cast … negative or disparaging light on a competing achievement are not permitted.”

But the Academy will not comment on what, if any, penalties will be imposed until after the close of voting next Tuesday at 5 p.m. 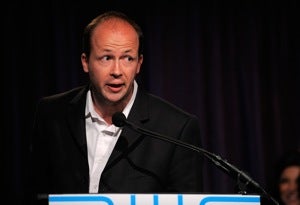 Chartier (left), who raised much of the money for “The Hurt Locker” and has never before been involved with an Oscar-nominated film, is one of the four producers who will receive an Oscar if “The Hurt Locker” is named best picture.

Wednesday, after his original message was made public, stirring up an outcry from competitors, he sent a second email to the same list of people. It read, in part:

“My email to you was out of line and not in the spirit of the celebration of cinema that this acknowledgement is. I was even more wrong, both personally and professionally, to ask for your help in encouraging others to vote for the film and to comment on another movie. As passionate as I am about the film we made, this was an extremely inappropriate email to send, and something that the Academy strongly disapproves of in the rules.

“My naivete, ignorance of the rules and plain stupidity as a first time nominee is not an excuse for this behavior and I strongly regret it. Being nominated for an Academy Award is the ultimate honor and I should have taken the time to read the rules.”

Chartier reportedly sent a separate letter of apology to the Academy. The other producers of “The Hurt Locker,” including director Kathryn Bigelow and writer Mark Boal, were unaware of his initial email until the news broke.

Bad-mouthing competitors is an Oscar-campaign tradition that has long gone on behind the scenes, though the Academy took steps to formally outlaw it in 2004, after DreamWorks ran ads quoting critics who said that while Renee Zellweger "will win" the Supporting Actress Oscar for "Cold Mountain," Shohreh Aghdashloo "should win" for "House of Sand and Fog."

In that case, DreamWorks quickly apologized and pulled the ads, and the Academy decided not to penalize the company.  Penalties for campaign violations can include a reduction in the film’s allotment of Oscar tickets, though Chartier’s apology and his status as an overzealous Oscar newbie could also mean he’ll get off with a scolding.

“The Hurt Locker,” which has been propelled to frontrunner status by its string of guild and critics awards, is reportedly not the first film to run afoul of campaign regulations this awards season. Academy policy prevents the organization from detailing penalties until the polls have closed.