"The Hurt Locker" scored a crucial, and surprising, victory over "Avatar" at the Producers Guild of America Awards, often considered a reliable predictor of the Oscar for best picture.

While James Cameron's blockbuster was considered a heavy favorite to win the top award from a guild that often rewards commercial success, the voters instead went for the lowest-grossing of the 10 nominees, adding to an impressive array of "Hurt Locker" wins that already included the Critics Choice Movie Awards and the top honors from numerous regional and national critics groups. 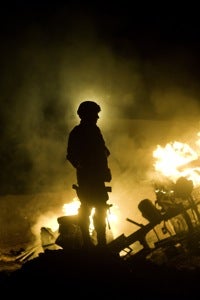 "I can't believe I'm up here -- I just thought it was going to be somebody else," said Kathryn Bigelow, the director and producer of the tense, gritty film about a bomb disposal unit in Iraq.  In her thank-yous, she  saluted the producers, saying "perhaps no other body understands the logistical challenges of making a film."

The Pixar film "Up" won the award for animated feature, while "The Cove" took home honors for documentary feature.