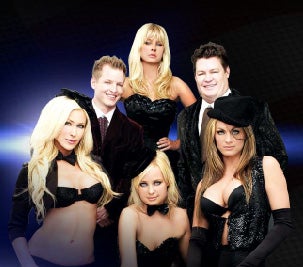 Jimmy and Dustin Flynt — nephews of legendary Hustler founder Larry Flynt embroiled in a legal battle with their uncle over the use of the Flynt name – have launched their oft-delayed website, FlyntNation.com, anyway.

The launch, they said, complies with the guidelines set forth by a judge in the pending lawsuit with Larry Flynt Publications, their uncle’s company.

“I hope everything gets back to normal, and we can all go about fulfilling and growing our family’s business,” Jimmy Flynt II told TheWrap.

Both Dustin and Jimmy (pictured above, left to right) left their uncle’s company two years ago. “It was in everybody’s best interest," Flynt II said.

But Larry Flynt Publications president Michael Klein told Adult Video News at the time, “They are trying to free-ride on their uncle’s famous last name, at his expense.”

He continued: “If Dustin and Jimmy entered the adult field as ‘Dustin and Jimmy Flynt’ or ‘Dustin and Jimmy,’ there would be no infringement. But their choice of Flynt Media Corp. as their company name, and their use of Flynt as the name of their video line, infringe trademarks filed with the U.S. Patent and Trade Office, and a trademark that has become world-famous over the past 35 years.”

Calls to LFP headquarters in Beverly Hills were not returned.

In January, U.S. District Court Judge A. Howard Matz issued a temporary restraining order against the nephews prohibiting them from using “Flynt” in the production or sale of adult videos. Undeterred, Jimmy and Dustin went ahead with their planned launch at the annual AVN Convention, the big adult industry trade show in Las Vegas.

The same month, the judge issued a preliminary injunction against Flynt Media over use of the Flynt name.

“We won the first two rounds,” Larry Flynt told XBIZ at the time. ” So everything is going our way.”

But the judge said the ruling does not prohibit the brothers from marketing or distributing adult-themed goods “that specifically contain their full and actual names (i.e. ‘Jimmy and Dustin Flynt’) so long as it also contains, in conspicuous bold and all capitalized letters, a disclaimer that states that Larry Flynt is not affiliated with the product or services and does not endorse them.”

That clarification opened the door for the brothers Flynt to launch their company.

A note on FlyntNation’s new homepage reads: “Larry Flynt Is Not Affiliated With This & Does Not Endorse This.”

Jimmy Flynt said that they’ll eventually offer DVD productions, but that those are caught in legal red tape. “We created 30,000 sleeves that are sitting in a warehouse,” he said.

“Right now, we’d have to alter them so much that it’d look like you are buying something illegal, with all the names and stamps and disclaimers. We’ll ship them once we win the case.”

Yet, Jimmy, a former EVP at Hustler, doesn’t see Hustler as a competitor.

However, Jimmy conceded, “as far as aggregators of adult content, yeah I guess you could say we’re competitors.” 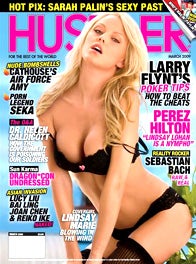 DVDs — along with magazines, Larry Flynt’s bread-and-butter — are not Flynt Media’s long-term focus, he said.

“Two years from now, adult DVDs will be dead,” Jimmy said. “I’m more focused on our digital and mobile distribution businesses. And worldwide, you have to be worldwide to survive in this business.”

“Even then,” he added, “You still have the difficulty of overcoming free. Any young man or woman can access scenes online, and never have to have to pay for them. It’s hard. I don’t have any answers to that.”

In July, the trial was rescheduled. A new date has not been set.

Meanwhile, the brothers are planning launch parties for Hollywood and Cincinnati, Ohio, where Larry Flynt launched Hustler in 1974. 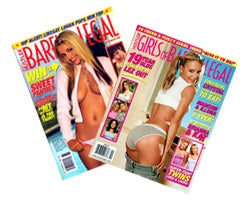 Flynt told the New York Post in January that despite Hustler’s precipitous drop in circulation (from more than 3 million at its peak to below 500,000 now) the company, which publishes seven other titles (including Barely Legal), grosses $500 million a year and turns a profit of $8 million annually.

Jimmy Flynt said the brothers have poured “a couple hundred thousand” dollars of their own money into the launch of Flynt Media — money that Larry Flynt said was part of his severance packages to them.

“You have to understand, we’re much more than just a company,” Jimmy said. “For our family, it’s been a family business, a way of life. I don’t look it as a company or a business. It’s all I’ve ever known.”