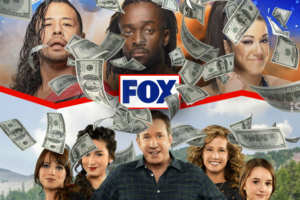 Has WWE ‘SmackDown’ Been a Boon for Fox, or a Billion-Dollar Bust?

The Jennifer Lopez-led film is on the verge of passing the domestic total of “The Upside,” STX’s other 2019 hit, which grossed $108 million. With nearly $102 million in ticket sales, “Hustlers” is also inching toward STX’s all-time top domestic grosser, “Bad Moms,” which pulled in $113 million in 2016.

STX didn’t see as much of a financial upside from “The Upside,” collecting a roughly 10% fee for handling distribution for Lantern Entertainment, the indie studio created by Lantern Capital after it purchased The Weinstein Company’s assets in bankruptcy. But STX owned and produced “Hustlers,” which it acquired in turnaround last October after Annapurna Pictures dropped the distribution rights during a turbulent fall for the studio that saw it also drop the rights to Jay Roach’s Roger Ailes film “Bombshell” while President of Film Chelsea Barnard left the company.

“‘Hustlers’ checked a whole number of really important boxes for us,” STX Chairman Adam Fogelson told TheWrap. “It was an opportunity for us to work with Jennifer again, and support an almost all female cast and filmmaking crew. And it was made at an incredibly efficient budget.”

The success of “Hustlers” at the box office goes a long way toward mending the narrative of a studio in dire straits.

A STX insider previously told TheWrap that as concerns regarding the financial state of the studio began to emerge, there was a feeling among employees within the company that they “don’t just want ‘Hustlers’ to work, we need ‘Hustlers’ to work.”

“From a narrative standpoint, the success of ‘Hustlers’ is absolutely important,” Fogelson said. “Its success is on the higher end of what I believed was possible, but it’s definitely not beyond what I thought was possible. I absolutely had in my head as a best case scenario that the movie could become a cultural hit.”

STX has withstood some recent struggles, as the 5-year-old studio’s mid-budget, star-driven strategy has yet to yield tenable results outside of its “Bad Moms” franchise.

“The Upside” was originally meant for release by The Weinstein Company in spring 2018, but was shelved following the studio’s bankruptcy. Lantern Entertainment, created by Lantern Capital after it purchased TWC’s assets in bankruptcy, tapped STX to handle distribution on the film, which became the indie studio’s first No. 1 film. But the profit to STX was limited by the fact that it was a distributor, not the producer of the film, which typically involves a percentage-based fee.

Aside from the successes of “The Upside” and “Hustlers,” STX has produced several box office disappointments in 2019.

“Poms” grossed $13.6 million at the box office in May in a distribution deal with producer eOne, with STX taking on the cost of prints and marketing. Another spring release, “Best of Enemies,” took in just $10.2 million on a $10 million production budget.

But the most painful misstep came with a May release of star-studded animated feature “UglyDolls,” which cost roughly $95 million between production and marketing and brand tie-ins, while bringing in only $32.4 million worldwide.

STX spent much of the summer seeking additional capital. The studio launched in 2014 with a $1 billion capital investment, and it raised an additional $100 million in March from its existing investors, who include private equity firm TPG Growth, Chinese conglomerate Tencent, Chinese fund Hony Capital and John Malone’s Liberty Global. Major lenders include JP Morgan, East-West Bank and others.

STX has said that concerns of its financial state have been overblown. While its 2019 slate so far has been feast or famine at the box office, studio execs argue that it has remained financially sustainable by taking different approaches to co-financing and marketing their films than legacy studios with bigger cash reserves. That has allowed it to reduce costs and make a profit on many films that it has released over the past few years, as well as reduced its exposure on recent releases like “UglyDolls.”

One example is the 2018 Amy Schumer comedy “I Feel Pretty,” which had a $32 million budget co-financed between STX and four other production outlets, including long-term co-financing partners Huayi Brothers and Tang Media Corporation. While reviews were mixed, the film grossed $94.5 million worldwide.

Another quiet 2018 success and collaboration between STX and Jennifer Lopez was “Second Act.” Again, the studio’s co-financing deal helped lessen its share of the film’s $16 million budget, while marketing costs were kept below $30 million. Box office results: $39.2 million domestic and $72.2 million worldwide. Overall, STX says that 12 of the 14 films released before “UglyDolls” have been profitable for the studio.

But Exhibitor Relations analyst Jeff Bock says that he believes STX will need to keep showing such financial agility. With the possible exception of “21 Bridges,” a Chadwick Boseman action film that could bring in African American audiences, he thinks it will be a while before STX has another “Hustlers” on their hands.

“It’s sort of a film where all the planets aligned. It fell into STX’s lap after Annapurna dropped it, and it had both really strong reviews from its festival premiere and a story connected to a hot button issue,” Bock said. “Many adult, mid-budget dramas need that sort of cultural immediacy to break through. STX will still be working with J-Lo but it will take more to replicate the success of ‘Hustlers.'”