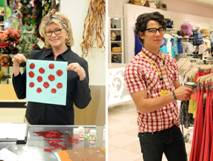 The reality show, which debuted April 1, 2009, features celebrities who work in ordinary jobs and trick unsuspecting citizens into thinking they’re mistaken about who they’re dealing with.