Michael Jackson once sang, "Don’t Stop (Til You Get Enough)." Apparently, for pop megastars Black Eyed Peas — and their co-dependent pals on Madison Ave. and in Hollywood — there’s no such thing as "enough" when it comes to whoring out the music and the brand.

CBS today announced that the Peas will be the "sole musical guest" for the network’s annual Victoria’s Secret Fashion Show special. Instead of strutting to the sounds of multiple artists, the lovely ladies in lingerie will be forced to be sexy exclusively to the beats of will.i.am and Fergie.

The arrangement is the latest coup for the Peas, who have morphed from a promising young hip hop collective into a marketing machine that happens to make music.

Over the summer, the Peas struck a deal with CBS to license their song "I Gotta Feeling" for use in the network’s fall image campaign. It was a hugely smart play for the Eye network: The track became one the biggest hit of the year. So every time the song played on the radio, millions of listeners may have made a not-so-subtle connection to images of the CBS lineup they saw in the network’s promos. 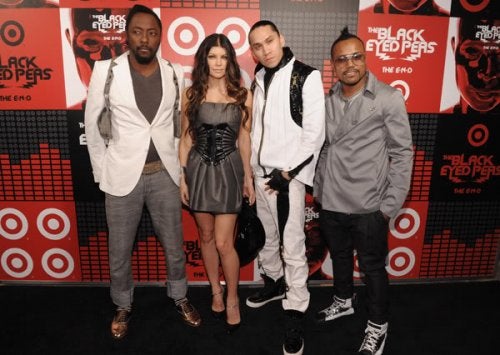 Except, of course, the Peas had also pacted with Target, giving the retail giant the rights to use "I Gotta Feeling" in its image campaign. It wasn’t just the song Target got: the Peas themselves popped up in the ads, acting all cool and Pea-like as they plugged a special deluxe edition of their new album "The E.N.D." available only at Target.

If only CBS marketing had found a way to hype its fall lineup at Target, the circle would have been complete.

Most musical acts would’ve been content to have sold out their song to two big corporate giants. Not the Peas.

In August, yet another massive American brand decided it needed some Peas magic. And so a reworked version of "I Gotta Feeling" also become the theme for the marketing of the new season of "The Oprah Winfrey Show." Naturally, the Peas performed the song live for O herself at that special new season kickoff party that shut down Chicago’s Magnificent Mile last month.

The Peas’ sell-out strategy for "I Gotta Feeling" was nothing less than a complete commercial master stroke. The single ruled Billboard’s Hot 100 for 14 consecutive weeks. And its success followed a 12-week run atop the charts for the lead-off track from "The E.N.D.," "Boom Boom Pow."

No wonder, then, that the Peas have once again lured Madison Ave. into its web of cross-promotion. DirecTV’s latest TV campaign features the Whores, er, the Peas shilling for satellite TV to the strains of their new single. "Meet Me Halfway."

"My wait is over. I’m hooking up my flat screen to DirecTV," Fergie coos in the spot.

In the CBS press release for the Victoria’s Secret Fashion Show, will.i.am tries to put the best face on his band’s shamelessness.

“We are in the middle of a really defining time right now,” he argues. “It’s the end of the traditional era of how we experience and consume music and media.”

He’s right, of course. And it’s hard to begrudge any pop act these days for realizing that the old formula for promoting an album — release singles to radio, appear on the talk show circuit, launch a tour– no longer applies.

But there’s a line between savvy marketing and self-parody. By being so ubiquitous, the Peas are running a serious risk not only of overexposure but of consumer backlash.

In fact, there’s evidence the revolt may have already started. Despite all the DirecTV love, "Meet Me Halfway" has stalled at No. 17 after four weeks on the Billboard Hot 100.