You may be shocked to learn that Marfa, Texas — the small, quirky town where the Amazon series “I Love Dick” takes place — is real.

In the show’s first episode, viewers get a glimpse of the small, southwest Texas town, not too far from the Mexican border. Immediately the audience sees that it contains a multitude of seemingly contrasting qualities — a combination of blue collar desert town and folksy, artistic retreat. It seems almost too weird to be real.

“There’s no other town like it,” “I Love Dick” co-creator Jill Soloway told TheWrap.

In the show, Chris Kraus (Kathryn Hahn) moves to said town with her husband Sylvère (Griffin Dunn), who gets a residency with a minimalist artist named Dick Jarrett (Kevin Bacon). Kraus becomes lustfully obsessed with the titular Dick and embarks on a personal journey — along with Sylvère — to discover what their relationship means and what sexual attraction truly entails.

When planning out the series, both Soloway (“Transparent”) and her collaborator Sarah Gubbins were struggling with where to set it. Early drafts had the story of a dysfunctional love triangle take place in upstate New York, but then Soloway’s partner, poet Eileen Miles, suggested looking at Marfa. It immediately clicked.

“One of the things it allowed us to do is to keep the three main characters locked in this embrace just geographically because there’s no place for them to go,” Gubbins said.

It’s a remote location in the middle of the desert, sitting at the intersection of two highways. It’s around a six-hour drive to San Antonio, the nearest major city and the closest airport is in El Paso is three hours, according to local gallery Ballroom Marfa.

The gallery offers many helpful tips for tourists. Cell phone reception is spotty, there are only two grocery stores in town and only two ATMs. When Kraus enters her new house for the first time, she notes the lack of modern amenities by saying it’s “like the f—ing Amish.” It’s a quintessential tiny town. 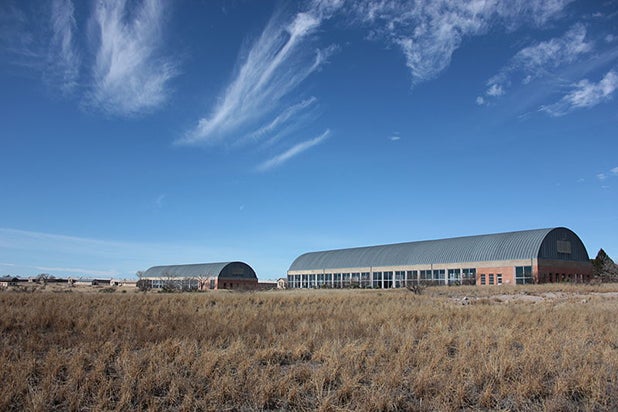 However, the town is filled with a community of artists that live nearby and who emigrated there. This was helped in part by Donald Judd, a minimalist artist of sculptures, furniture and architecture who moved to Marfa to create permanent installations, according to the Marfa website. Now the Judd Foundation does guided tours, including in an area called “The Block,” which features two large airplane hangers filled with Judd’s art.

Since then, the Marfa has become covered in gallery and art spaces. The one we mainly see in “I Love Dick” — a large brick-lined warehouse — is based on the Judd Foundation headquarters.

One of the locale’s most well-known landmarks — although not depicted in the show — is Prada Marfa, a permanent installation located around 30 miles outside town. It’s a replica of a Prada outlet store, but it’s unobtainable. It sits in the middle of the desert providing a stark contrast to the world around it while also not being open for business.

Because Marfa is such a small town, it’s a place where “everybody knows everybody’s business,” Gubbins explained. That allowed for the writers to create drama that included the town’s residents in Chris’ conflict.

“You can’t be a hermit in Marfa because you have to go into town to get supplies. You really rub up against each other,” she continued.

Plus having a setting already populated with different kinds of art allowed Gubbins and Soloway to explore the art community and a person’s relationship with creativity — a core theme of “I Love Dick.”

“We weren’t going to have to invent that,” Gubbins said. “It was just part of Marfa, and the collisions of so many different kinds of worlds in one tiny town… is what Marfa’s about.”

However, what Marfa also has is a blue collar population, who worked in oil and who had been on the land for decades, either as immigrants from Mexico or as bastions of the old American West. So on one side you have all the art installations and tourists and on the other, you have a low socioeconomic class of residents.

In order to understand all this, you have to look no further than the show’s titular character. Despite the fact that Dick is an intellectual and academic, he’s also a cowboy. He rides a horse into town and owns a sprawling ranch. He’s a culmination of Marfa’s weird contrasting qualities.

Other aspects of “I Love Dick” are based on real life. Kraus is a surrogate for the author of the “I Love Dick” novel, also named Chris Kraus, who was married to a much-older philosopher named Sylvère Lotringer. Dick himself is a combination of Judd (they both share the same initials) and Dick Hebdige, a media theorist later identified as the subject of the original letters. All these connections — from the locations to the names — are close to reality and according to Soloway, it was all done to create a closer link to Kraus’ source material.

“She did a lot of name dropping of authors and cultural references,” Soloway said of Kraus. “We wanted the series to have that same feel.”