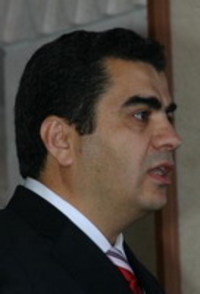 This man looks rather fierce, but he is a frequent giggler– if you can get in to see him. Here’s today’s adventure in Ankara. I arrived at the offices of Orhan Duzgun (left), the general director of Turkey’s office of Cultural Assets and Museums. He’s the guy in charge of the museums and Turkey’s smuggling problems. The ministry is in Turkey’s former Parliament, a lovely stone Ottoman-era building, with carpets and pictures of what looks like a harem on the wall. In fairness, I’d been warned: it’s government bureaucracy AND the week of a general election, don’t count on it. Still, I’d been given a meeting with him at 3, then 1:30. But when I got there, they said: Very sorry. Maybe tomorrow. Turns out he’d just landed from China, and he’d sent his other functionaries who’d gone on the trip home to sleep. Your intrepid correspondent was not deterred. I asked: Five minutes? I came all the way from the United States. (This did not sway the Louvre either, in my January visit.) Answer: No. I hovered over the desk of the lovely young assistant, Bahar, looking increasingly unhappy. Five minutes! I was not moving, dear. The story ends happily. I got 45 minutes, Turkey gets their say in the book, AND I met the German ambassador on his way into Mr. Duzgun’s office, where they were to discuss Turkey’s demand for a Sphinx statue from Boguzkoy, a Hittite treasure that’s in the Berlin State Museum. What’s the reason for the non-return? "I don’t know, I’ll ask him," Duzgun giggled, which made him look boyish and adorable. By the way, I was amazed to learn that he had never heard of Zahi Hawass. Hmmm.