It was like waking up in my own version of "The Truman Show."

I’m 10 minutes into what I thought was just a normal job, and I make a comment about the movie "Borat." Then a realization hits me, like waking up to the irony of my words. Not only had I just made a reference to Sacha Baron Cohen’s first film "Borat," I realized that I was now in his next film, "Bruno."

And I had unwittingly made the reference while looking Sacha Baron Cohen square in the eye.

What’s a professional television producer/media consultant to do? It was like time had stopped. I looked around and thought, "Please don’t tell me they constructed this whole scene (and of course the producer in me is quickly adding up the budget for this moment) around the potential of my reactions to his character’s antics?"

Should I stay or should I go? A million-dollar question. However, in that moment, I didn’t think it was my million dollars that was at stake. So here I am waking up "in a movie" and wondering, "Do I bust it?" or "Do I keep going?"

Our company, Jacquie Jordan Inc./TVGuestpert.com, was booked in December to do a media consultation for a German TV personality who wanted to do a celebrity fashion show and that we’d be observing a focus group screening the pilot. I was asked if I would mind if they taped the consultation. I didn’t have a problem with that, as I’ve had several of our company’s services recorded.

When I arrived at the "focus group" in Sherman Oaks, I was quickly sequestered to a "control room."  I read the release form, which waived all my rights to any claims for future financial remuneration beyond what our company was being paid for our services. There was so much language about not making monetary claims that I thought, "Wow! They really are optimistic about the potential of this pilot selling and being a hit." I was impressed with the bravado of their confidence.

When I was given the go-ahead to enter the control booth at the focus group, I misstepped my cue (I realize this now but didn’t in the moment) and walked in on Sacha Baron Cohen embracing his wife, Isla Fisher.

I was asked to exit and reenter, and when I did, Bruno was on, offering me  champagne — at 10 a.m.  I immediately noticed that the focus group was completely miscast for what I thought was a celebrity fashion TV pilot: It was a crowd of 50-plus gray-haired, midwestern-type men that could not have been easy to round up in Los Angeles.

It wasn’t long after — when I was questioning Bruno about his "celebrity relationships" — that I made the reference to "Borat." I was using that as an example of "celebrity stalker" behavior. Being the consummate professional that I am, I stayed for the entire two-hour taping of my "Bruno" experience.

In the Alice in Wonderland way in which I was Punk’d, I also ended up randomly at the very first test screening of "Bruno," in a packed audience of 18-35 men wearing baseball caps. I sat nervously wondering — how did it go?

I didn’t make the cut; I don’t think my reactions were shocking enough. But the scene I was supposed to be in was in the movie but I was replaced by two over-50 heterosexual men — who drank the champagne. 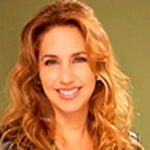 New York Times bestselling publisher and two-time Emmy-nominated producer, Jacquie Jordan is author of “Get on TV!” and founder of Jacquie Jordan Inc. / TVGuestpert.com. TVGuestpert is a media development, publishing, management and production company.
x
Looks like you're enjoying reading