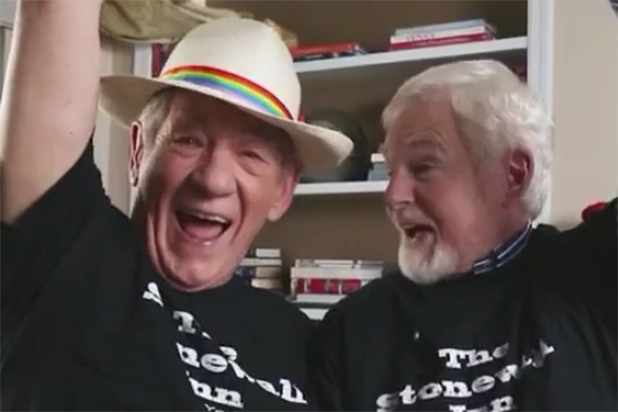 Ian McKellen and Derek Jacobi celebrated the Supreme Court’s ruling in favor of marriage equality with a playful proposal on social media Friday.

In a Vine posted to McKellen’s Facebook page, the “Vicious” co-stars celebrated the decision by throwing confetti in the air while Queen’s “We Are the Champions” played in the background. “Will you marry me?” Jacobi jokingly asked his co-star.

In the ITV series, which began airing in the U.S. on PBS in 2014, McKellen and Jacobi play an elderly gay couple who resent each other after living together for nearly 50 years.

Both 76 years old, McKellen and Jacobi — who are not a couple in real-life but have been friends since meeting at the University of Cambridge in the 1950s — will act as the grand marshals at Sunday’s Gay Pride March in New York City.

The Supreme Court of the United States, in a 5-4 decision delivered a historic ruling on Friday, declared gay couples across the country have the constitutional right to marry, no matter what state they live in.

“This ruling is a victory for America,” President Obama said in a speech responding to the ruling. “This decision affirms what millions of Americans already believe in their hearts-when all Americans are treated as equal we are all more free.”