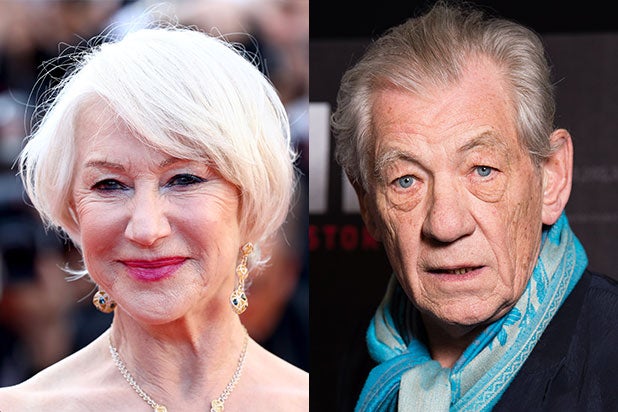 The film is arriving at the height of next year’s awards season.

Bill Condon directs the drama about career con artist Roy Courtnay (McKellen) in an adaptation of a novel by Nicholas Searle. Courtnay meets a wealthy widow named Betty (Mirren) online and moves into her home with the intent to swindle her. And though she’s an easy mark, he slowly comes to care for her. McKellen’s character in the book has been compared to Patricia Highsmith’s “The Incredible Mr. Ripley.”

Jeffrey Hatcher, who also wrote Condon’s “Mr. Holmes” starring McKellen as the aging detective, wrote the screenplay based on Searle’s book from 2015.

Warner Bros. also announced that it moved up the release of the Rebel Wilson comedy, “Isn’t It Romantic,” by a day from Valentine’s Day to Feb. 13, 2019.

“The Good Liar” will open opposite the third “Kingsman” film and a week ahead of “Frozen 2.”

Condon last directed Disney’s “Beauty and the Beast” remake. Mirren just appeared in Disney’s “The Nutcracker and the Four Realms.” And McKellen is attached to the film adaptation of the Broadway musical “Cats” directed by Tom Hooper.

18 Movie Reboots With Gender-Swapped Leads, From 'His Girl Friday' to 'The Hustle' (Photos)

From lady "Ghostbusters" to talk of a female James Bond, Hollywood has taken a shine to remaking classic movies or TV shows with gender-swapped leads as a way of mixing up a tried and true formula. But the trend dates back farther than to just the last few years. The latest example of this is "The Hustle," opening Friday, which swaps out Steve Martin and Michael Caine with Rebel Wilson and Anne Hathaway in a remake of "Dirty Rotten Scoundrels." Here are some other movies that looked to remake something old with not just a fresh face but from an entirely different point of view.