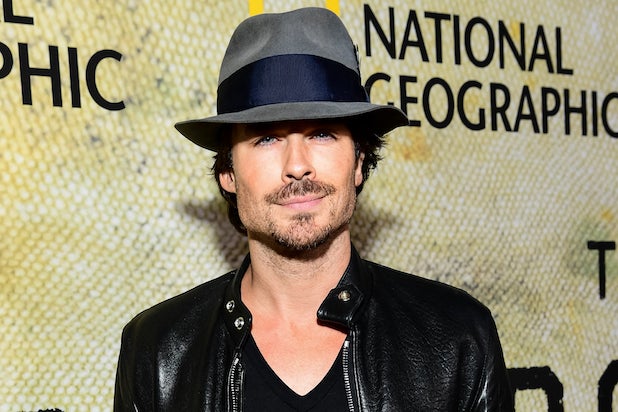 Calling all “Vampire Diaries” fans! Ian Somerhalder is officially back in the bloodsucker game and teasing his new character on the upcoming Netflix series “V-Wars.” But spoiler, alert, he’s not playing a vampire — at least we don’t think.

“Here he is… @drlutherswannofficial aka Dr. Luther Swann,” Somerhalder captioned a shot of himself wearing a white doctor’s coat and sporting some bloody knuckles, which he posted to Instagram Wednesday. “Would you trust this man?” Yes? Possibly?

Somerhalder’s first dip into the vamp world ended last year, when “The Vampire Diaries” wrapped its eight-season run on The CW last spring.

Netflix gave a 10-episode, straight-to-series order to “V-Wars,” back in April, which is an adaptation of the IDW comic series of the same name.

“V-Wars” tells the story of Dr. Luther Swann, who enters a world of horror when a mysterious disease transforms his best friend, Michael Fayne, into a murderous predator who feeds on other humans. While the disease begins to spread and more people are transformed, society fractures into opposing camps, with normal people pit against the growing population of vampires. Swann must race against time to understand what’s happening, while Fayne rises to become the powerful underground leader of the vampires.

The drama hails from High Park Entertainment and IDW Entertainment and is based off IDW’s franchise of the same name, written by best-selling author Jonathan Maberry. William Laurin and Glenn Davis (“1-800-Missing”) will serve as showrunners, with “Stargate”s Brad Turner directing and exec producing. Eric Birnberg and Thomas Walden will exec produce for High Park, alongside IDW Entertainment president David Ozer and CEO Ted Adams, and Games Gibb for Marada Pictures.