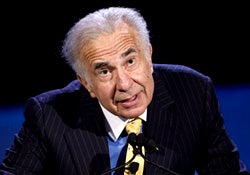 "The Icahn Group is now offering to purchase UP TO ALL of Lions Gate’s outstanding common shares," the investment company said in a release on Friday. "In addition, the expiration date of the Offer has been extended to April 30, 2010."

A representative for Lionsgate did not immediately return a request for comment.

The offer comes on the very day that Lionsgate is poised to bid in the final round of the expected sale of MGM, a deal that Icahn opposes. Lionsgate has been struggling with what price to set for the debt-laden MGM, and is bidding against better-funded and larger rivals, Time-Warner and Access Industries.

Lionsgate said Icahn’s initial offer was 28.5 percent less than what Wall Street analysts have said its shares are worth. Shares of Lionsgate stock were trading at $6.00 Friday morning, up about half a percent.

Meanwhile, it was not entirely clear what strategy Icahn was pursuing, and why he felt shareholders that did not sell to him previously would now do so. (A representative for Icahn declined to comment.) He currently owns 18.9 percent, and has sought seats on the board, which so far Lionsgate has not granted him.

Lionsgate has proposed that its shareholders adopt a defensive rights plan, or poison pill, to keep Icahn from accumulating shares.

Icahn said on Friday that he intended to pursue legal action against Lionsgate’s poison pill. If his offer is successful, his firm, the Icahn Group, would replace the studio’s board of directors with its own nominees, he said.

In rejecting Icahn’s earlier offer, Lionsgate said that the Icahn Group "has limited experience in operating a business in Lionsgate’s industry."

“Despite this, the Icahn Group is seeking a greater opportunity to participate in decisions regarding major acquisitions and other matters that would affect shareholders.”

The studio’s board of directors voted unanimously against the unsolicited offer, calling it a "partial bid," “financially inadequate,” “coercive” and “not in the best interests of Lionsgate and its shareholders and other stakeholders.”

"Lions Gate previously criticized our tender offer for being partial," Icahn said Friday. "That is no longer the case."

Here’s the press release from the Icahn Group:

NEW YORK, March 19 /PRNewswire/ — Carl C. Icahn announced today that the offer (the "Offer") by certain of his affiliated entities (the "Icahn Group") to purchase up to 13,164,420 common shares of Lions Gate Entertainment Corp. ("Lions Gate") has been amended to provide that the Icahn Group is now offering to purchase UP TO ALL of Lions Gate’s outstanding common shares. In addition, the expiration date of the Offer has been extended to April 30, 2010.

The amended Offer is conditioned on, among other things, there having been validly tendered and not withdrawn a number of Lions Gate common shares which, together with the common shares already owned by the Icahn Group, would constitute at least 50.1% of Lions Gate’s common shares (taking into consideration options and restricted stock). The Icahn Group has the right to waive this condition and any other condition, subject to applicable law. In addition, the amended Offer is conditioned on: (i) all rights issued or issuable under the poison pill adopted by Lions Gate’s board of directors on March 11, 2010 having been cease-traded, found to be illegal or unenforceable, redeemed by the board, or otherwise eliminated; and (ii) the receipt by the Icahn Group of all government or regulatory approvals necessary to complete the amended Offer (including Investment Canada Act approval) on terms and conditions satisfactory to the Icahn Group in its reasonable judgment.

The Icahn Group has determined not to increase the previously announced Offer price of $6.00 per share in cash. The Offer price is $1.15 higher than the $4.85 closing price of the common shares on February 4, 2010 (the last trading day prior to the first date in 2010 that the Icahn Group resumed purchasing Lions Gate common shares), representing a premium of more than 23%. The amended Offer will not be subject to financing.

Mr. Icahn also announced that the Icahn Group intends to pursue legal proceedings to set aside the poison pill adopted by Lions Gate, which restricts the rights of Lions Gate shareholders to accept the Offer. The adoption of the poison pill represented a failure of certain conditions to the Offer. The Icahn Group waived the breached conditions in this particular instance so as to proceed with the amended Offer.

I believe that Lions Gate’s management should not further leverage up the company to purchase a film library without allowing shareholders the opportunity to decide whether increasing exposure to this segment is wise. I believe library values are currently declining due to, in part, weak DVD sales. Lions Gate already has a major investment in a library – its own. It should be up to the shareholders to determine if they wish to more than "double down" on another library, especially in light of the company’s admitted "substantial degree of leverage".(1) Lions Gate’s latest actions convince me that the current management and board will never allow shareholders to make their own determination on this extremely important decision.

We therefore intend, if our offer is successful, to replace Lions Gate’s board of directors with our nominees, several of whom would be Canadian citizens. I believe that the best course for Lions Gate is to pursue a strategy aimed more at the consolidation of film and television distributors, as opposed to the acquisition of library assets. Once in place, we are hopeful that our nominees would guide Lions Gate in that strategic direction. I also believe that it may be desirable to replace top management with several individuals who more closely share our vision for the future of the company. In addition, we expect to propose that the new board form a committee to oversee the retention of a third party consultant tasked with dramatically reducing Lions Gate’s overhead.

I understand that such a dramatic shift in management and growth strategy may thrust Lions Gate into a potentially volatile period of transition, but I believe the company will emerge much stronger on the other end."

The Icahn Group looks forward to working productively with the Canadian authorities to obtain approval for the amended Offer. To that end, the Icahn Group intends to discuss with the Minister of Canadian Heritage various commitments it would be prepared to make in order to ensure that any acquisition of control of Lions Gate as a result of the amended Offer would be of net benefit to Canada, which may include the divestiture of Lions Gate’s shares of Maple Pictures Corp. ("Maple") to one or more Canadians such that the film distribution business currently carried on by Maple in Canada will be operated independently from Lions Gate (as was similarly undertaken by Lions Gate in 2005). Lions Gate disclosed in SEC filings made prior to the Offer that: (i) there is a risk that the Minister of Canadian Heritage could determine that Lions Gate is out of compliance with the Investment Canada Act, or that events beyond Lions Gate’s control could result in its ceasing to be Canadian-controlled pursuant to the Investment Canada Act; (ii) if Lions Gate ceases to be Canadian-controlled under the Investment Canada Act, it and Maple may no longer qualify for or be entitled to access refundable tax credits and other Canadian government and private motion picture industry incentives that are restricted to Canadian-controlled corporations; and (iii) such a change in status could also cause Lions Gate to be required to repay certain tax credits and other government incentives previously received and default on certain distribution obligations, thereby adversely affecting its financial results. The Icahn Group believes that these risks could be substantially reduced or eliminated through the agreements it will seek to reach with the Minister of Canadian Heritage in connection with any acquisition of control of Lions Gate as a result of the amended Offer. In addition, if the amended Offer is successful, the Icahn Group intends to cause Lions Gate to remain a Canadian incorporated entity for a period of not less than five years.

Lions Gate stated in its Schedule 14D-9 filed with the SEC on March 12, 2010 that the Offer could result in the acceleration of approximately $516 million of its indebtedness if lenders were to elect to declare events of default relating to certain "change in control" provisions contained in its debt documents. If such acceleration occurs (which will not be a condition allowing the Icahn Group to withdraw the amended Offer), the Icahn Group believes that Lions Gate should seek a replacement source of funding in order to continue to operate its business in the ordinary course. The Icahn Group is prepared to begin discussions with Lions Gate immediately regarding a bridge facility that the Icahn Group would be willing to provide – without a commitment fee – at the expiration of the amended Offer, should these "change of control" provisions be triggered as a result of the Icahn Group’s purchase of Lions Gate shares in the amended Offer. The Icahn Group expects that such bridge facility would be required to be repaid through a combination of new debt and the proceeds of the sale of Lions Gate equity through a rights offering in which all Lions Gate shareholders would be invited to participate, thus de-levering the company. The Icahn Group would be willing to backstop any such rights offering.

The terms and conditions of the amended Offer are set forth in the Offer to Purchase dated March 1, 2010, as amended by the Notice of Variation and Extension dated March 19, 2010, to be distributed to holders of Lions Gate’s common shares and filed with the SEC as exhibits to the Icahn Group’s amended Schedule TO and with the Canadian securities authorities on SEDAR.