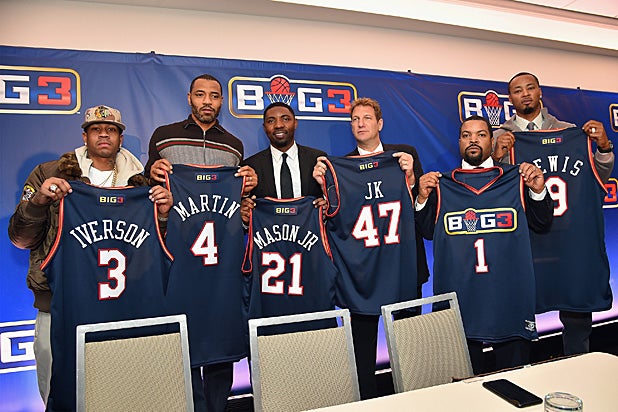 Ice Cube is still basking in the success of his inaugural BIG3 basketball season, which ended Saturday with a star-filled championship game in Las Vegas.

And while none of his players protested the national anthem like a increasing number of NFL players have over the past year, the rapper/director/actor told TheWrap that he’ll allow them to if choose to next season.

“I would support whatever the players wanted to do,” Cube said in an interview ahead of the championship. “Us as a league, we wouldn’t make a big deal out it. That’s the beauty about being an American — you have the freedom to stand, sit, lie down or roll over [during the anthem].

Also Read: Ice Cube on BIG3 Championship, Champagne Celebrations and if Lamar Odom Will Ever Play

“It’s a beautiful thing when you have the personal freedom to do what you want to do. The BIG3 as a league would not make a big deal out of that,” he added.

Earlier this month, “Grey’s Anatomy” actor Jesse Williams — who was a member of the audience, not a player at the BIG3 game at Staples Center in Los Angeles — made a political stance by refusing to stand for the national anthem in response to the violence happening at the time on Charlottesville, Virginia.

During the anthem, Williams posted a video with the caption: “We’ll stand when you do,” which many of his followers believed was directed at President Trump.

A dozen members of the Cleveland Browns — including white tight end Seth DeValve — were the latest NFL players to hit the headlines due to an anthem protest, and while Cube agrees with them being able to sit out, he said “the whole thing that we’re discussing is the distraction from the real issue that Colin Kaepernick was protesting, which is police brutality.”

“That’s the issue. That’s what he was really protesting. So I can’t get wait until we get back to that and not worry about if guys stand, take a knee, take a seat, take a nap — at the end of the day, who really gives a damn?” the N.W.A. founding member asked.

“It is easier to talk about the distraction than it is to deal with the real problem that he is protesting, which is police brutality. Our society likes to take the easy route when dealing with hard subjects. Them not standing, not taking the knee — and we’re not caught up in the original issue, which is long gone. We talk about the smoke and not the fire,” he said.

Also Read: Ice Cube to Bill Maher: 'Is This a Political Show or Is It a Show About Jokes?' (Video)

The BIG3 — Cube’s 3-on-3 basketball league that he co-created with Jeff Kwatinetz — culminated its rookie season on Saturday, with a championship game airing live on Fox from the MGM Grand Garden Arena in Las Vegas.

Team Trilogy, which included former NBA players Rashad McCants, Kenyon Martin and Al Harrington, capped off an undefeated season with a 51-46 win over the 3 Headed Monsters in the title game.