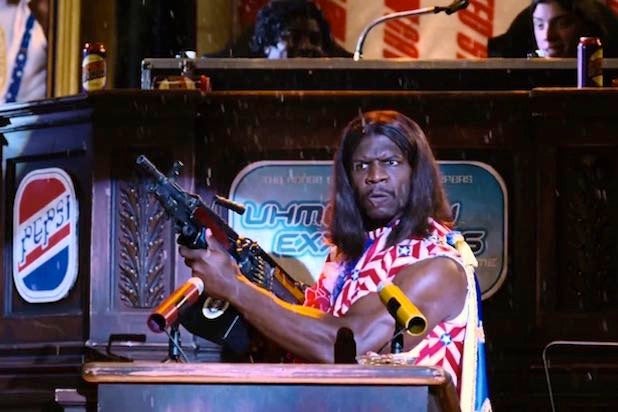 The 2016 election is about to get even more entertaining — if 20th Century Fox allows it, at least.

Providing they get permission from the studio that released the 2006 comedy, Crews will be reprising his role as wrestling champ-turned-president Dwayne Elizondo Mountain Dew Herbert Camacho.

“This is what satire is for … to be able to hold up a mirror and say, ‘This is crazy,'” he said. “‘Idiocracy’ was like that, but this all of a sudden felt like a very immediate need for the true meaning of satire and what it can actually do.”

Cohen and Judge began discussing the idea of creating fake campaign ads for President Camacho after Cohen tweeted earlier this year that he “never expected ‘Idiocracy’ to become a documentary.”

“I didn’t think anyone would see it,” Cohen said of the tweet that went viral. “That was just an interesting, eye-opening thing, like, wow, this is just tapping into something that a lot of people are feeling right now.”

While discussing similarities between the fictional movie president and actual presidential candidate, Cohen said, “They both seem to be intent on destroying the world. But maybe Camacho more accidentally?

Also Read: 'Game of Thrones' Will Blow Your Mind If This Arya Stark Fan Theory Is True

“The most dangerous contrast to Trump is that Camacho actually realizes he needs advice from other people, and knows that he’s not the smartest guy in the room,” Cohen continued. “Also, not a racist.”

And, yes, in case you’re wondering, Cohen said he would vote for Camacho over Trump.