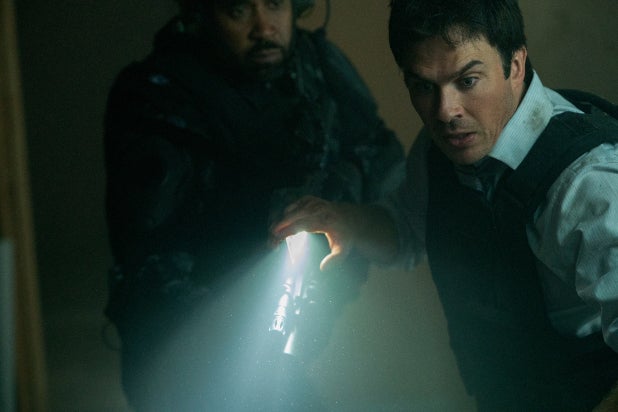 Is the Writers Guild of America’s Standoff With Agencies Starting to Thaw?

”It’s such an entrepreneurial time,“ Lydia Antonini tells TheWrap of wading through the streaming waters

The streaming era has led to an explosion of content opportunities, as the rush into an on-demand world has created unlimited shelf space.

While nowhere near the size of other comic book powerhouses like Marvel or DC, IDW Publishing marked its 20th anniversary this year. IDW launched IDW Entertainment in 2013, and has developed properties such as “Wynona Earp” — which returns for its long-awaited fourth season on Syfy next year — and “Dirk Gently’s Holistic Detective Agency.”

Currently, IDW has four series in development with Netflix, including the Ian Somerholder-led “V Wars” (pictured above) and the long-gestating “Locke & Key” adaptation from Carlton Cuse.

TheWrap spoke with Lydia Antonini, president of IDW Entertainment, about being a smaller comic book-based production outfit and why they’ll never do an overall deal with a studio or streamer. The below has been edited and condensed for clarity.

As a content creator, how do you feel about the new streaming era?

It’s sort of overwhelming for everyone, because it’s such an entrepreneurial time. Even just Apple and Disney coming on board, and then doing weekly releases instead of binge viewing is sort of fascinating. I don’t know how it’s going to turn out handling things that way.

I think everybody sort of decided that was the better way to be creative. There’s pros and cons to both, so it’s really interesting to kind of play through it all.

We’re very fortunate to be a client of WME and partner with Endeavor. There’s so much volume of activity and conversation and business that flows through those two places that we can be a very small production company/budding studio and still have a lot of knowledge, which I think would be hard to get any other way.

Speaking of binge viewing, it’s interesting that it’s become the industry standard in streaming. Now with Disney and Apple going weekly, are they now the ones being the contrarians?

Yes. It’s crazy. I’ve had a lot of conversations, where it will be like “O,h it will never work. Disney, Apple and WarnerMedia are trying to fight what everyone wants.” I’m super curious if it’s going to work and how it’s going to work, and how you might watch it differently.

With larger comic book outfits like Marvel and DC tied so heavily to their parent company’s streaming services, what kind of opportunity does that give IDW?

We sort of sit in that indie comic space with Boom!, Skymap, and Dark Horse, and we’ve stayed truly independent of being in a first look deal with anyone. It gives us great flexibility to represent all of the independent creators who gave us their ancillary media rights. That’s all the positive. The negative is so many great writers are in overalls and in deals.

Because our library has so many diverse titles in it, there probably wouldn’t be one place where we could give each of them their best shot. If our role is really taking these books and giving each of them its best shot, we kind of have to stay independent. Which is where Endeavor Content becomes a really helpful partner for us.

Such much of our TV and films are based on comic books. Are you worried that space is going to become too over-saturated?

I think it depends on how narrowly you cut the idea of comics. If you look at [IDW Imprint] Top Shelf, they did John Lewis’ March Across the Bridge (Bloody Sunday) called “March.” It’s sort of a biopic. It’s a comic book, it’s a graphic novel. But it’s also a historical piece that’s a highly visual. Does that fall into it or not? We have stories that are just crime thrillers. We have stories that are just kids’ stories, that maybe have a light supernatural element.

I think that indie publishers who are really about empowering an auteur or creator voice who could be telling any story — not just a story that is superheroes are capes, or what we classically think of as comic books — that’s always going to a compelling place for IP to start.

The classic idea of superheroes? Yea sure that could get oversaturated. But every time someone says that, then something like “The Boys” comes along.

With this huge boom in comic book adaptations, does this make everyone from the publishing side raise their game and offer up new ideas?

For IDW, because it’s still for-profit publishing, we still have to react to what the comic book stories will stock. We have a lot of conversations about how to take more risks and how to have different protagonists and points of view. But that never moves fast enough. We do have to service the comic book stores, and service that world. It’s an exciting time to push, but there’s still going to be the same things that have always worked in comics.