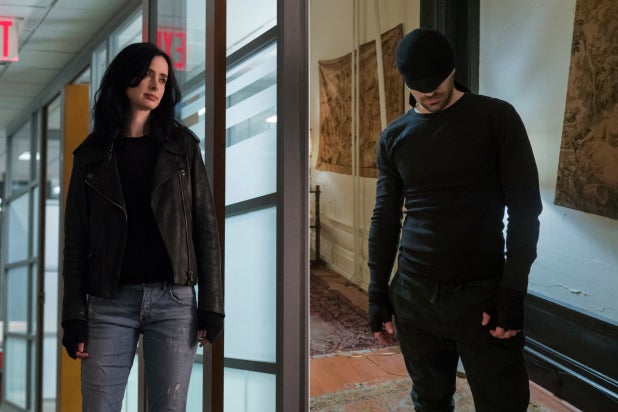 While “Avengers: Endgame” will likely see Marvel revive a bunch of dead superheroes who were dusted into oblivion, Marvel TV may try to do the same to its roster of Netflix characters that the streamer snapped out of existence on Monday.

Just don’t expect them to show up on Disney+, the forthcoming Netflix-competitor that Disney is launching later this year.

Though Marvel TV declined to comment if the studio was going to revive the canceled series, Marvel TV head Jeph Loeb hinted that it was not done with Daredevil, Jessica Jones, Iron Fist, The Punisher or Luke Cage.

“Our Network partner may have decided they no longer want to continue telling the tales of these great characters… but you know Marvel better than that,” Loeb said in a statement, shortly after Netflix canceled “The Punisher” and “Jessica Jones,” its two remaining Marvel TV series. “As Matthew Murdock’s Dad once said, ‘The measure of a man is not how he gets knocked to the mat, it’s how he gets back up.'”

Compared to the big screen films and Marvel TV’s other series — namely ABC’s “Agents of S.H.I.E.L.D.” — the Netflix shows were much more R-rated in nature, complete with gory violence and mature subject matter like sexual assault and racism. That doesn’t make the shows a good fit for Disney+, which is focused on being more family-friendly.

But they could be perfect for Hulu, which already has harder-edged series like “The Handmaid’s Tale” and the Stephen King-inspired “Castle Rock.” And Hulu didn’t exactly call us crazy when we asked them this question last week.

“Marvel has a ton of titles we’d be interested in,” Craig Erwich, Hulu’s senior vice president of original, said when asked by TheWrap if Hulu would have interest in reviving one of those series. “We’ve had a relationship with Marvel since ‘Runaways,’ we’re getting into business on these animated shows. I’m sure it will lead to — you know, business gets you business — we have a good creative relationship with them. That’s where opportunities tend to arise.”

Hulu, which is about to become majority-owned by Disney after it closes its deal to acquire most of 21st Century Fox, is already expanding its relationship with Marvel. Last week, the streamer signed a hefty deal for multiple adult-targeted animated series, including “Howard the Duck,” “M.O.D.O.K..” “Hit-Monkey” and “Tigra & Dazzler,” which will culminate in a crossover special, “The Offenders.” That looks to be the exact same kind of TV deal that Marvel signed with Netflix in 2013.

But Disney+ fans will be pleased to know that the upcoming streaming service will still be getting its fill of Marvel heroes.

Marvel TV’s big-screen counterparts, Marvel Studios, is developing multiple TV series for Disney+ that will star characters from its films including Loki, Vision, Scarlet Witch, Falcon and The Winter Soldier.