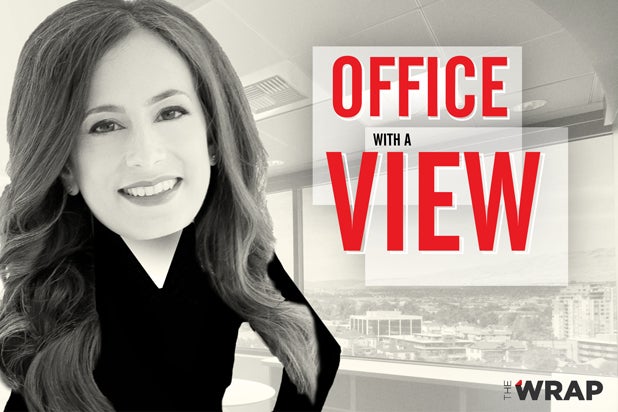 IFC is “Always On, Slightly Off,” per its tagline. Lately the network is always landing on the radar of today’s top comedy star–as evidenced by the Will Ferrell-Kristen Wiig-Maya Rudolph-Michael K. Williams-Haley Joel Osment-Emily Ratajkowski-Tim Robbins-Michael Sheen miniseries “The Spoils Before Dying,” which premieres Wednesday night.

President Jen Caserta led IFC’s rebrand from the Independent Film Channel in 2010, transitioning to a TV comedy-focused network. It took a little time, but the stars soon flocked to her with their pet projects that they couldn’t place anywhere else. Nowadays, the cable channel boasts projects with a legitimate Who’s Who of sketch, improv and stand-up comedy.

Perhaps the channel’s warm reception from comedy nerds nationwide was best summed up when Caserta told us: “We feel like if IFC was not around, people would be sad about it.”

TheWrap spoke with Caserta about her hits and misses (she didn’t see it with “Man Seeking Woman,” but loves it on FXX), how she handles notes to geniuses, and if animation will ever return to her cable channel, among others.

TheWrap: IFC seems to be the official TV home of weird comedy — but is “weird” an offensive adjective to to describe your slate?
Jen Caserta: “Weird” doesn’t offend us by any means, because “Slightly Off” we wear proudly as a badge of honor as part of our tagline.

Your strategy is kind of brilliant, because comedians tend to have weird sides, offbeat sensibilities and odd pet projects …
When you look at “Portlandia” (pictured below) or Fred’s [Armisen’s] other show that he’s doing with us with Bill Hader and Seth Meyers, “Documentary Now!” and “Spoils Before Dying,” they do absolutely feel like if they weren’t on IFC, where else would they go? Those are projects that I can honestly say didn’t have much success elsewhere and came to us because the creators felt like this would be a good place.

What you’re saying makes absolute sense and I think one of the things we pride ourselves on is … [housing] very different projects, but all can sit alongside each other very comfortably, and it’s not jarring, and they feel like they belong here. And that is something that attracts talent to us. There is this collaborative respect that we have for each other as a result of that. I think they feel like their projects are very well-protected here. As long as we get our say at the table, we let people go off and do what they came here to do, and they have a good time with that.

What is your “say at the table,” from a notes basis?
There’s a process, and obviously it can’t be willy-nilly on any side. You have to have some kind of structure; you’re building television shows. People need to have some kind of familiarity in terms of what you’re accustomed to seeing. But we have agreements up front in terms as to creative tone and story outlines and we do try not to be so heavy-handed, we do try not to over note. Does that mean we always agree? No, but that’s with any healthy environment — we talk about it, we discuss, there’s give-and-take between two partners.

We’re going to make sure our notes are meaningful, and try to be very respectful of people’s timelines and point of view. We don’t rewrite jokes.

Was there anything that you passed on that ended up being really strong?
In terms of things that came our way and we didn’t move forward on it, I can certainly say that “Man Seeking Woman,” which is on FXX, which Broadway Video produces, is a great show that we ultimately took a look at and it just wasn’t right at the time — and I’m not saying just us, for either party — but I respect what’s happened, I’m a fan of the show, I watch it. You win some, you lose some.

Any IFC shows that you had high hopes for that never caught on?
This is a show that we are incredibly proud of and our actions certainly stand by this, but “Comedy Bang! Bang!” (pictured above) now is in it’s fourth season, and every season now we have upped the ante.

This show stands for so much for IFC. We have premiere talent and comedians and actors and actresses and musicians on the show. You look at Scott [Aukerman] and his pedigree and what he’s brought to television comedy writing and “Between Two Ferns” — he’s the guy who people come to see and sit across the couch from.

You see Reggie Watts going off and enjoying a late-night career with James Corden, and now we have Kid Cudi joining, which we’re really excited about… That’s a show that — it’s weird! And we love that it’s weird, that’s the point of it. So the comedy geeks enjoy it a lot more than the mainstreamers, that’s for sure.

Part of your job is to keep people employed, to make money — the creative aside, are you happy where IFC is at?
Yeah. It’s funny, you know, sometimes I have to reflect on how long we’ve been at this — and it really hasn’t been that long. It’s been four years since we flipped that switch, went in a completely different direction. Initially, w were not the first stop for projects because we’re a newbie and didn’t have a heck of a legacy in comedy.

I think our first real, smart move was what we did with the brand. It does feel so solid and so connected. So that someone like you can come and say, “I love what it stands for.” And we do too, and we’re really proud of that — I’m really proud of that. That was probably one of the most transformative events of my career. Couple that with Kristen Wiig, Maya Rudolph, Seth Meyers, Bill Hader, Marc Maron, Scott Aukerman, all of the guests on his show — of course Fred [Armisen] … what a roster of people we get to work with — they actually want to be on our network. That does, it makes me incredibly proud that we were able to do that in a few shorts years — and now we’re not the last stop anymore.

From a business perspective, we increased our viewership, we changed our business model, we went ad-supporting. And in the ad community, they love us too. It’s nice to be loved!

Is Michael K. Williams actually funny on “Spoils”? He was so scary on “Boardwalk Empire”…
You can have Maya Rudolph and Kristen Wiig just show up and be funny, and then you’ve got this guy, Michael Kenneth Williams, who is known for these iconic characters, dramatic characters — and shows up and he’s just funny! How does that happen? When does that happen? And those are the moments that people love.

We all can relate to them. You go to see your favorite comedy actors in a drama — you point to like Will Ferrell, Steve Carell — and you go, “Oh my God they can do that!” and vice versa. That’s what makes it so much interesting and fun. And I think [Williams’] delivery was so spot on. He played Rock, he owned that role.

The beauty of that particular project is the one-liners: they play it straight and it is really how they deliver it. We were so thrilled to have him join the cast. And it was again one of those unexpected moments. You’ve been seeing a lot of that in television, people either reappearing [a la Osment], or acclaimed actors or actresses coming to television and doing things you wouldn’t expect, or an eclectic mix of casting — so why not do that in comedy too?

Adult animation seems like it’d be a natural fit for IFC. Is there any of that in the pipeline?
I love adult animation and animation comedy is one of my favorite things as well. We’ve made a conscious decision to have this trajectory, and we did actually try animation — with great projects and great people attached to it — a few times, and it didn’t quite click. I think what we needed to do was be a little bit more mature with that — and I don’t mean “mature” in terms of our humor, because that’s certainly not what we are — mature in terms of our trajectory with the network. So, we took a pause, and we just said, “Let’s go down a particular path.”

So, starting with sketch, building up a nice sketch library, and then, “OK, what does that look like in terms of scripted narrative? OK, now how do we evolve sketch so it’s now more parody? Oh, let’s do an ironic take off of a miniseries. Now, what’s next for us?”

And we talk a lot about not having done everything we want to do in the comedy space, and we’re looking at new formats of comedy, so: panels, talk, green screen — animation is just not there yet. But that’s not to say we won’t get there … we’re just not focused on it right now, and I hope that we are again.

“The Spoils Before Dying” premieres Wednesday night at 9 p.m. on IFC.