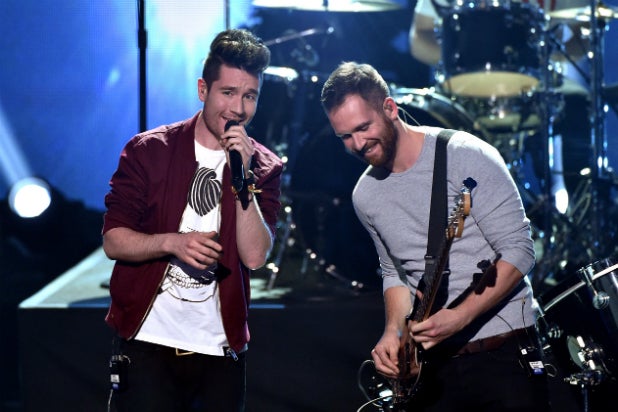 Bastille performs at the "iHeartRadio Music Awards" May 1 (Getty Images)

NBC has picked up the “iHeartRadio Music Awards” for 2015, following Thursday’s 1.7 rated broadcast of the inaugural awards ceremony.

The three-hour broadcast on May 1 drew an average of 5.4 million viewers and increased demo viewership on Thursday night by 55 percent on the average since the Winter Olympics, NBC said in statement.

“The ‘iHeartRadio Music Awards’ established some amazing benchmarks in its inaugural year. The feedback from artists, music labels, and most importantly, fans and viewers made it clear that the new approach we took in creating a show truly powered by the fans could deliver results,” Clear Channel President John Sykes said in a statement announcing the pickup.

Rihanna, Miley Cyrus and Pharrell were among the artists picking up trophies in the inaugural show.

The awards were executive produced by Sykes and Tom Poleman of Clear Channel Media and Entertainment, Ryan Seacrest Productions, and Ian Stewart and Hamish Hamilton of Done and Dusted Inc., who produced the show for Universal Television.