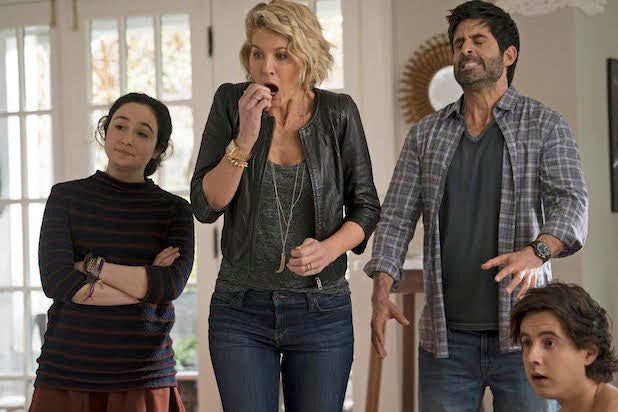 Sure, it’s not unusual for children to have an imaginary friend, but for a grown established woman in her 30s? It’s just kind of weird.

On ABC’s new comedy series “Imaginary Mary,” Alice’s (Jenna Elfman) long gone — or so we thought — imaginary friend, Mary, comes back into her life to try and stop her from further pursuing a pretty serious relationship.

So why would her fictitious childhood friend try to sabotage a seemingly perfectly good relationship?

Also Read: 'Scandal' Main Characters Ranked By How Shady They Are (Photos)

Well, when Alice was just 6-years-old her parents were going through horribly rough patch so to distance herself from all that terrible adult drama, she made up Mary who promised to love her, protect her from heartbreak and sadness and most importantly teach her swear words.

Basically, Mary was here to provide Alice with the support her parents weren’t giving her and teaching her how to be an independent woman in the process until at some point — Alice didn’t need her anymore.

So back to the part where Mary unexpectedly pops up in Alice’s life again. She does so because Alice has fallen in love with a divorced dad of three kids and rather than meet the kids and go any further, it’s better she just turn around and forget about this dude before she ends up hurt again.

But all of this is quite endearing actually. While, this may be a family comedy with a cute animated character, it brings up some pretty serious issues — like how someone’s toxic upbringing can have lasting effects well into their adulthood.

Alice, a successful woman in her 30s who is a sports public relations executive has no point of reference for what a healthy thriving relationship looks like — which is why Mary shows up. And rather than trying to help her navigate this grown up situation, she invokes a fight or flight response in Alice and at first she chooses the latter before realizing that it was actually the wrong thing to do.

There are a lot of us who are technically grown and going about life all happy and dandy, but when it comes to having healthy relationships, sometimes we suck. So it’s refreshing to see an adult woman who seemingly has it all together needing her childhood imaginary friend as she struggles through this adult relationship because of her messed up views from her parents’ divorce.