IMAX CEO Richard Gelfond doesn’t want his theaters adopting the trend of adding recliner seats — and don’t even get him started on ButtKickers.

During a Thursday conference call, Gelfond walked media analysts through the “problem” with the comfortable — yet sizable — seating in many modern movie theaters.

“The problem is, using recliners — for example — you lose 50 percent of your potential seats,” the IMAX CEO said. “And on weekends and busy periods, IMAX is much higher percentage of capacity than other formats.”

“We’re reluctant to go all the way to recliners,” he continued, citing the specific geometry his rooms survive on. IMAX is, however, testing out “hybrid” and “other forms” of seating, though he offered no specifics on what those terms meant. Gelfond described the results of such testing as “a little bit encouraging.”

The executive’s chosen words were a little bit stronger and more decisive when asked about adopting D-Box and ButtKicker products for IMAX seating. Gelfond called those chair enhancements “one-trick ponies,” and he wants nothing to do with them.

Despite his cold, the raspy-voiced Gelfond was in a good mood this morning. And why not? His company had just reported a strong first-quarter 2016, thanks mostly to “Deadpool” and “Batman v. Superman” box office hauls.

Unfortunately for IMAX, its stock slumped in the early going this morning. But shares rose so much sharply in after-hours trading last night.

Below is the last five days worth of trading, to show you what we mean — check out the launch and spike on the far right.

Also Read: Netflix's 'Crouching Tiger' Sequel Made It Onto AMC Screens After All 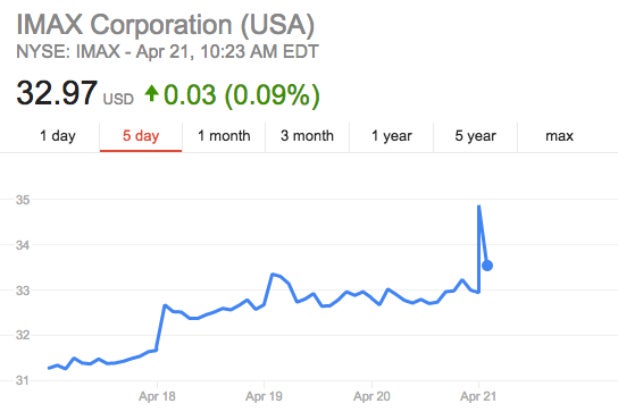