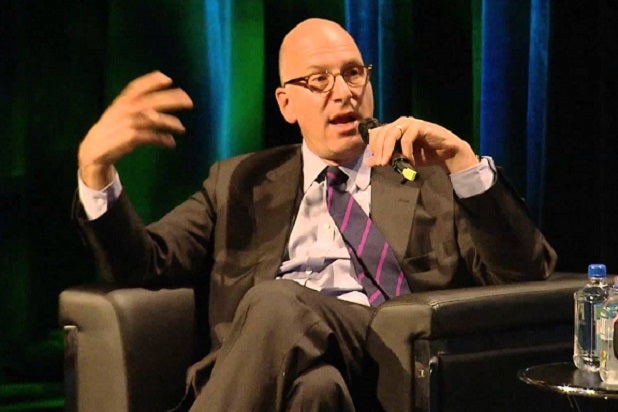 IMAX virtual reality stations will start appearing in pilot locations as early as the end of the year, IMAX Entertainment CEO Greg Foster said during the Bank of America Merrill Lynch Media, Communications & Entertainment Conference on Wednesday in Los Angeles.

Foster dove deeply into the company’s virtual reality plans, saying that “50 percent of our time right now is focused on that model, that rollout.”

The future vision, according to Foster, will allow moviegoers to purchase a bundled ticket — for both a theatrical release and also admission into a VR experience located at the multiplex. “You can interact, flying the Millennium Falcon, go into the cantina and bring down the Death Star,” he cited as a hypothetical example. (No specific plans for “Star Wars” VR have been announced by the company.)

“We’re going to grow them as fast as we can,” he said at the conference, citing opportunities tied to movies and also in e-sports. “All of our core partners would like VR in the core locations, the ones that really work,” he added, revealing that some theaters will utilize “excess capacity” to house new VR stations. “Like in, say, screen 16 in a multiplex that’s perhaps not selling out,” he explained.

“VR will play at multiplexes and storefronts in an arcade kind of way,” added Foster.

During the afternoon Q&A session, the CEO outlined how the motion picture technology company figures into the 2016 through 2018 movie release slates, also hinting that IMAX’s partnership with Michael Bay and “Transformers 5” will likely result in the release of virtual reality content — in addition to the fact that the action sequel is being shot on IMAX cameras.

He argued that productions that use IMAX cameras tend to draw in audiences. “The fact that ‘Sully’ was shot with IMAX cameras, and did one-third more business at the box office than expected, was not lost on us,” he said, adding that the Russo Brothers are filming the upcoming “Infinity Wars” Avengers movies with the cameras. A large percentage of Christopher Nolan‘s upcoming “Dunkirk” was also filmed with IMAX cameras.

“Every time you see the Millennium Falcon and know it was shot with an IMAX camera, that will draw people in,” he said, referencing J.J. Abrams‘ use of the equipment in “Star Wars: The Force Awakens” and the fact that IMAX box office accounted for 11 percent of the film’s total $2 billion-plus global take.

There’s a “demand issue,” Foster revealed, saying that the company is working to get more cameras into the hands of filmmakers who want them.

Foster also discussed international strategy, underscoring the importance of local language content in China, India, Korea and Japan. “We can’t keep our theaters dark,” he said, referring to lulls in certain international markets that occur when blockbuster Hollywood titles aren’t in theaters. “Our job is to provide 52 weeks of compelling content in every theater we have.”

With 1,100 IMAX theaters open all over the world, that number will continue to grow, said Foster, citing a 500 to 600 backlog.