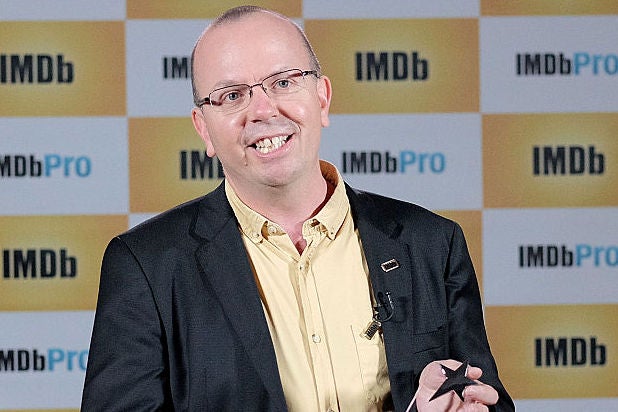 It’s no big secret that Col Needham, founder and CEO of IMDb, is a voracious film fan. But did you know he has now seen 10,000 films in his lifetime?

The internet pioneer crammed in some 480 screenings in the last 10 months to meet the 10k goal ahead of his 50th birthday on Jan. 26. He finished just in time for IMDb’s 26th anniversary on Monday (Oct. 17).

“I discovered something about myself — I’m more goal driven than I care to admit,” Needham told TheWrap in an exclusive interview in honor of the occasion. He added with a laugh, “Cue the montage of me watching more and more films. I was racing to meet my goal and found I was ahead of schedule.”

For the first time ever, Needham has also revealed exclusively to TheWrap his top ten list of all-time favorite films. (See it below with his commentary). His No. 1 favorite is Alfred Hitchcock‘s “Vertigo,” which Needham has confessed to seeing more than 50 times.

As for his 10,000th film, it is Focus Features’ “A Monster Calls.” The film, which Needham screened at the Toronto International Film Festival last month and is ranked as his No. 1 of the year so far, is a fantasy drama starring Sigourney Weaver, Felicity Jones, Toby Kebbell, Lewis MacDougall and Liam Neeson. Directed by J.A. Bayona, the movie centers on a boy who wants help from a tree monster to help him cope with his single mother’s terminal illness.

“There was not a dry eye in the house,” Needham said of his experience watching it during the film’s world premiere in Toronto. “It has some really great positive messages about dealing with loss and things that can be going on in a young person’s life,” he added.

Needham has been keeping a running list of films he has seen for decades, which is why he knows exactly which movie is his 10,000th. (And that number does not count repeat viewing. These reflect individual, distinct titles.) “IMDb began life as my film diary in the early 1980s,” he told TheWrap. “It dates back to January 1, 1980.”

For someone who has seen thousands of movies, you’d think the narrowing-down process for a top ten list would be difficult. But Needham has also kept a running tally of his top 10 for several years, adjusting it over time as new films come out.

“My top ten expresses how I feel about film as a whole,” said Needham. “Entries are there in their own right, but they also serve as proxies for other films, directors and genres,” he explained.

Many of his favorites are older films, like 1944’s “Double Indemnity.” Some are in black and white, as is 1958’s “Touch of Evil.” And only one top pick is from this millennium, 2010’s “Inception.” “I hope to inspire younger people to see these films,” said IMDb’s CEO. “It’s my not-so-secret maniacal plan to inspire people around the world to be as big a film fan as I am.”

Here is Needham’s top 10 films of all-time list, annotated with his commentary from our interview:

1. Vertigo (1958)
“I fell in love with Kim Novak’s character and the ‘Oh no, that’s not what happened at all’ aspect of the movie.”
2. Inception (2010)
“I love a twist ending or a twist middle. I am a big fan of Christopher Nolan.”
3. North By Northwest (1959)
“The suave sophistication of Cary Grant’s character is unmatched. It also serves as a proxy for great Hitchcock films: ‘Spellbound,’ ‘Notorious’ and ‘Rebecca.'”
4. Double Indemnity (1944)
“It’s a Billy Wilder film where he does superb film noir.”
5. Bringing Up Baby (1938)
“In my opinion, this is the funniest movie ever made. It stars my all-time favorite actor, Cary Grant, and my all-time favorite actress, Katharine Hepburn (after whom I named one of my daughters).”
6. Aliens (1986)
“This is actually the film I’ve seen more than any other film — more than 60 times, including twice in French… ‘Aliens’ has relentless thrills and action. Once everything starts to go wrong on that planet it’s non-stop.”
7. Se7en (1995)
“That was one of my most tense viewing experiences. The conflict at the end is the best part: Should he dispense justice or not?”
8. Pulp Fiction (1994)
“It redefined cinema in the 90s… The non-linear timeline is great, as are the opening and closing scenes from two different perspectives.”
9. Eyes Wide Shut (1999)
“Hitchcock, Wilder, Stanley Kubrick is the order of directors I love… I was haunted by that film for weeks… People don’t realize it’s a Christmas movie. There’s a Christmas tree in virtually every scene. It’s one of two movies I re-watch every Christmas Eve — that and ‘It’s a Wonderful Life.'”
10. Touch of Evil (1958)
“This is the last great film noir and I remember being blown away by the famous single take opening shot. It also has one of my favorite endings of all time.”

As for movies that barely missed the cut, Needham said Wilder’s 1960 comedy “The Apartment” and Steven Speilberg’s 1975 “Jaws” were near misses. “I was a nine years old and pleaded with my mom to take me to see ‘Jaws,'” said IMDb’s founder. “It had such a big impact on me. So much so that I was afraid to go in the local swimming pool!”

For those of you who aspire to be like Needham, you can compile your own personal viewing history on IMDb Watchlist here: imdb.com/watchlist.