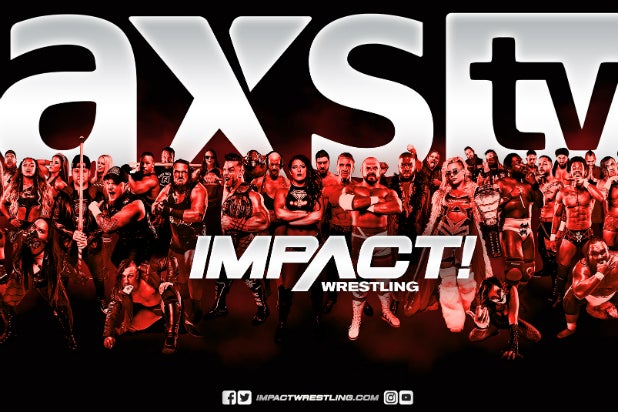 AXS TV’s got you, Tuesday night pro-wrestling fans. Beginning in earnest on Oct. 29, Impact Wrestling is moving its weekly series from Saturday nights on the Pursuit Channel to Tuesdays on AXS.

The weekly wrestling series will shift up from its current 10 p.m.-midnight ET time slot to instead occupy 8-10 p.m. ET, filling the “SmackDown Live”-sized void soon to be left in USA Network’s schedule. The pre-taped “Impact!” starts at 8/7c, at 6 p.m. MT and at 5 p.m. PT.

“SmackDown” moves from Tuesdays on USA to Fox’s broadcast channel on Friday, Oct. 4. TheWrap first reported Fox Sports’ “SmackDown” acquisition, the shift to Fridays, and its plans to keep the once pre-taped show live.

Beginning on Tuesday, Oct. 1 — the first Tuesday night without a “SmackDown” on USA Network — AXS will air Impact Wrestling preview specials. The big one is Oct. 22’s “This Is Impact!,” which will recap Impact Wrestling’s biggest pay-per-view event of the year, “Bound for Glory.”

“This Is Impact!” will include “profiles on Impact Wrestling’s biggest stars and exclusive non-televised matches from ‘Bound for Glory,'” according to the AXS TV announcement.

Also Read: Fox Sets Pair of WWE Specials - Plus a Blue Carpet Pre-Show - Ahead of Its 'SmackDown' Premiere

“We are excited to bring the best professional wrestling on television to AXS TV, long recognized as a premier destination for world-class sports entertainment programming,” said Ed Nordholm, chief corporate officer of Anthem Sports & Entertainment and president of Impact Wrestling. “We are excited to showcase the incredible athleticism of our diverse talent roster on a larger platform across the country, providing AXS TV with over 100 annual hours of must-see weekly programming.”