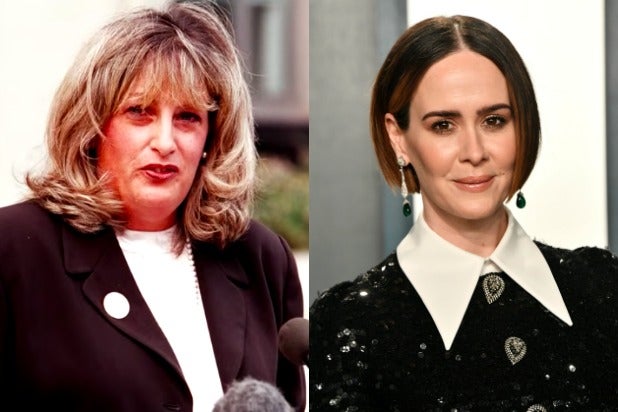 Hold on to your wigs: Sarah Paulson dropped a first look at her portrayal of Linda Tripp in Ryan Murphy’s “Impeachment: American Crime Story” on Friday and boy, did they nail that look.

“Linda. American Crime Story: Impeachment has begun principle photography ⁦@MrRPMurphy,” Paulson tweeted, along with a photo of a TV screen, showing footage of her in her Tripp wig, glasses, outfit and makeup.

Tripp was a former White House employee who was a key figure in the Bill Clinton-Monica Lewinsky scandal in 1998, the story that will be the focus of “Crime Story” Season 3. “Impeachment: American Crime Story” was originally scheduled to premiere this fall on FX but was delayed back in January due to Murphy’s congested schedule.

The season was just two weeks away from going into production when the pandemic hit in March. Not long after that, Tripp passed away. As Paulson said Friday, principle photography on “Impeachment” has begun, though no premiere date has been set for the season at this time.

This marks the second time Paulson will be portraying a real-life person for Murphy’s “Crime Story,” but as you can see, her transformation into Tripp for “Impeachment” entails much more work (at least in the physical sense) than the one she did to portray prosecutor Marcia Clark in “The People vs. O.J. Simpson.”

Also Read: Sarah Paulson Can't Say if She'll Star in 'American Horror Stories' - But She Will Be Directing Some of It

“This is going to require a lot of things,” Paulson said during an interview on “Jimmy Kimmel Live!” in June. “I’ll be wearing a lot of prosthetics and body transformational accoutrements, if that’s a word I can use.”