Fans of Sarah Paulson who tuned into Tuesday’s premiere of Ryan Murphy’s “Impeachment: American Crime Story” might have had to do a double-take to make sure that the Emmy-winner really was the person playing Linda Tripp, as almost every aspect of her physical appearance was overhauled to make her fit the part.

Paulson, who played Marcia Cross on “The People v. O. J. Simpson: American Crime Story,” says she herself was shocked by the amount of work that went into her transformation, which she knew would require some changes — but not that many.

“What I can say is that we didn’t know in the beginning of the process what would be required, obviously,” Paulson, who gained 30 pounds to play the woman infamously responsible for exposing the affair between Monica Lewinsky (played by Beanie Feldstein on “Impeachment”) and President Bill Clinton (Clive Owen) said.

“I don’t have a nose that looks like Linda’s. There’s plenty about me that doesn’t resemble her. I resemble her more internally probably than — I’ve said publicly before — than I care to admit. But that’s for me and my shrink to figure out,” the FX star said. “And it’s not about betrayal, it’s about all the other things that are motivating the betrayal and on Linda’s side, at least as I’ve come to understand it, for me to play it. So I gained 30 pounds and we didn’t know what that would look like or what it would do to my face or not. And so we were sort of in a waiting game to figure out what that would require. And so once I reached that weight, we determined that we were going to need other things to help complete the process. So I was willing to gain as much weight as I was able to and the rest we had to come up with other ways of solving that.”

Additionally, padding of about 4.5 pounds was used to complete Paulson’s look, along with prosthetic teeth, a prosthetic nose and a wig mimicking Tripp’s very ’90s blonde hairdo.

But physical characteristics aside, Paulson hopes her effort into portraying Tripp as a person will change the public’s perception of her — even if it’s not necessarily for the better. 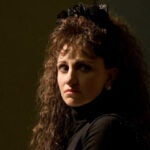 “My hope is that it’s illuminating. I hope what is revealed about Linda in our show is equally illuminating for people who thought they knew about Linda and who she was and what motivated her,” Paulson said. “And that’s really why I was interested in doing it, was an opportunity to, again, not try to engender good feeling towards Linda, in terms of her choices, but just for an opportunity for comprehension and understanding without sanctioning the behavior, necessarily. Some people may rethink it and have different ideas. It will be very interesting to see what that conversation is like. I may need to leave the country when that happens, for my own heart’s sake, but still.”