Forget monsters, vampires, and ghosts: People are the scariest thing there is. Few supernatural horrors have the power to unnerve and flat-out scare in the way a well-crafted realistic thriller can cause an audience to become unglued. “We Need to Talk About Kevin” is light on jump scares, but it is more terrifying than any other film this decade. “Green Room” positively owns viewers by confronting them with a very believable, everyday evil.

The bleak “Imperium,” in which Daniel Radcliffe plays a young FBI agent (based on real-life Fed Michael German) who goes undercover with neo-Nazis to uncover potential plans to initiate a domestic terrorist threat, has the potential to be a real-world shocker for the year of Donald Trump. It almost gets there, thanks primarily to a carefully intense performance from Radcliffe, but writer-director Daniel Ragussis, making his feature debut, fails to engage on a level deep enough to leave a lingering mark.

Radcliffe’s FBI agent, Nate Foster, is book-smart but green in the field, a desk jockey whose tastes run to classical music rather than bro-propriate hip-hop or rock. Dreams of a more exciting gig lead to a careful-what-you-wish-for scenario when a no-nonsense agent running an under-funded domestic terrorism unit recognizes Foster’s interrogation skills.

This officer, Angela Zamparo (Toni Collette, flashing a weary brassiness) has her eye on a far-right extremist group with ties to a rabble-rousing internet radio host (Tracy Letts), thinking the collective may be working to assemble a dirty bomb. Eager to prove himself, Foster gives in to Zamparo’s manipulations and agrees to go undercover with the skinheads. 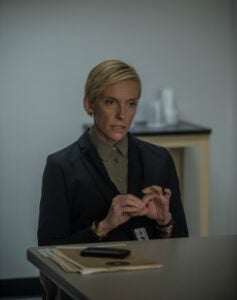 The star’s transformation from nebbishy office kid to a frankly imposing skinhead street soldier is unsettling and impressive. One could crack wise about the actor as a physically threatening figure — “Aren’t you a little short for a stormtrooper?” — but Radcliffe brings a cold authority to his dual-layer performance. He convinces us of his constant calculations and paranoia even as Nate Foster cons the white-supremacists into thinking he’s actually one of them.

Head shaved and armed with a dense backstory and FBI resources, Foster begins to infiltrate what turns out to be a loosely-connected “scene” in which thuggish skinheads barely mix with more determined militants, wealthier white-collar money men, and other splinter groups on the racist “white pride” front.

As Foster is pushed to uncover actionable evidence, “Imperium” effectively illustrates the variety of neo-Nazi philosophy and activism (to pervert a more idealistic word) as it observes the head-butting and cautious collusion between several different organizations. This catalog of common evil becomes particularly ugly as the undercover agent climbs the money ladder, eventually getting close to the sort of calm, upper middle-class people who casually inject their supremacist bile into the local community.

Ragussis maintains scene-to-scene tension thanks to Radcliffe’s work, yet his characterization of the different extremist groups sometimes slips into the cartoonish. There’s a palpable danger throughout, as Foster lies to people who claim to prioritize honor, but the overriding impression is that some of these groups are incompetent, even dopey, rather than seriously dangerous.

It can be satisfying to see some of the film’s more vile characters laid low, but the truth regarding the ambitious Alex Jones-like radio host, for example, rings false in the end, and that sour note undermines the film’s own conception of nationalist extremist threats.

Particular incidents do stand out, as when the skinheads pull Foster into an assault on a mixed-race couple, forcing him to improvise a method to protect the couple without blowing his cover with an impulsive but not entirely stupid lieutenant. Radcliffe plays these incidents superbly, conveying Foster’s intelligence and morality while showing how tenuous his control over a situation can be.

He also forges more quiet, empathetic connections; one such meeting of the minds is troubling as the undercover agent is taken in by Gerry (Sam Trammell, “True Blood”), a well-to-do white-power activist who conceals his leanings beneath a veneer of traditional family values and community standing. He listens to Leonard Bernstein even as he spews his own racist hate, which is more effective for being more softly-pitched than loutish skinhead slogans.

In spite of the potential of a scene like that, where Radcliffe’s FBI agent finds some empathy with evil figures, Ragussis’s script doesn’t cut very deep. He occasionally tries to bolster its sense of danger with montages of white-supremacist movements and imagery that plays like cheap tricks, this film’s version of a jump scare.

While there’s a point where Foster’s immersion in the far right-wing mindset seems to weigh particularly heavy, we’re never truly confronted with the prospect of Harry Potter seriously wrestling with or tempted by the ideology of his temporary compatriots.

“Imperium” hits all the right thriller beats, and it successfully exploits the intensity of undercover work with violent extremists. The film finally falters in its superficial characterization of Foster’s quarry, and the unwillingness to dive into the far end of that murky emotional pool. Radcliffe is clearly game to take the leap, but in the end “Imperium” allows us to keep its collection of racist malcontents at bay, safely corralled as a socially aberrant Other.