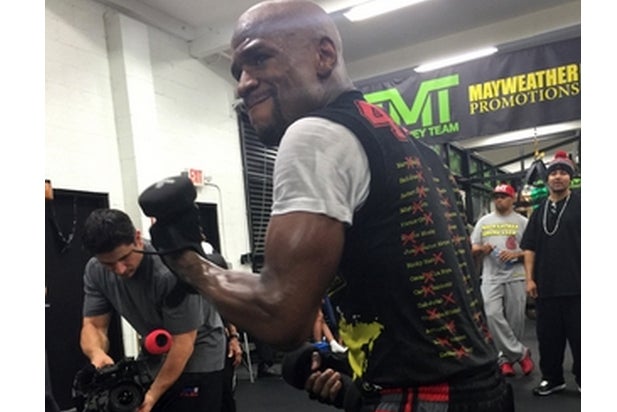 When Floyd Mayweather announced his intention to fight fellow boxer Manny Pacquiao, he did so by posting a copy of the signed contract on Shots, a photo-sharing app in which he’s an investor.

Launched in 2013 by brothers John and Sam Shahidi, Shots has been providing Mayweather fans with a unique window into his training regimen, leading up to his historic fight. Mayweather is constantly posting pictures (and videos) from training camp — everything from his pounding of the speed ball to visits by celebrity friends like Mariah Carey.

Behind the scenes, John Shahidi plays a key role, which predates Mayweather’s investment in Shots.

Known for his digitally savvy ways, Shahidi has been advising Mayweather on his social media marketing efforts for several years. He also helped connect Mayweather with another social media powerhouse, Justin Bieber, who is also an investor in Shots.

Like Mayweather, Shots has been busy of late. The company recently raised $8.5 million in new funding and launched an app for the Apple Watch.

TheWrap: Why did you create Shots?
John Shahidi: We are creating a positive social community, one where people can be themselves and not worry about what others think or say about them or about the pressures of how popular they are online. Our vision is to create tools for people all over the world so they can express their true feelings.

How has the product evolved since launch?
We initially launched with only the front-facing camera so users can express their feelings with only a selfie. We later launched Reply Shots so you can reply to a selfie with a selfie. Shots then became a real-time status update with a photo, so we then introduced the Back Shot and, this past week, 3 Second Shots.

How would you describe your user base?
Everyone is having fun by being themselves and positive.

On the product side, what are you primarily focused on right now?
We recently released 3 Second Shots, our video feature inside Shots. It’s been a hit and we want to make this new experience better. It’s mobile video, so of course it’s going to need attention, especially for those with bad Internet connections.

What’s the biggest lesson you learned during your time building Shots?
Don’t worry about what anyone thinks. Stay focused on the mission and get it done.