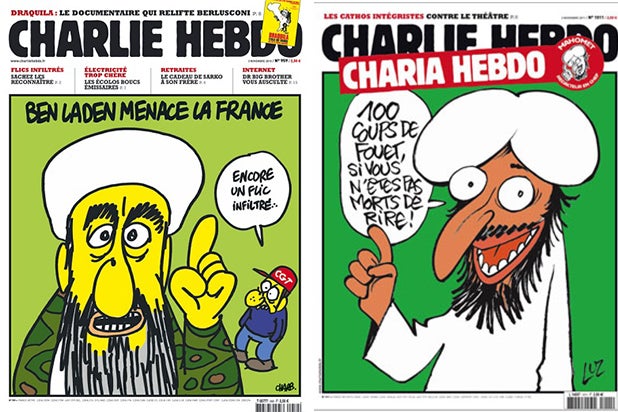 In the wake of the murderous attack on the editorial staff of French satirical newspaper Charlie Hebdo, there is really only one way forward: publish, print, draw, film.

Publish the cartoons that seem to shake the foundations of deluded young men with guns.

Draw the pictures that parody the powerful.

The principle that has been under debate of late with the threats against “The Interview” – freedom of expression – came into terrorizing focus Wednesday with the murders of 12 innocent people.

It seems that comedy is completely terrifying to terrorists and despots.

It is apparently so potent that a tiny weekly publication with a circulation of 30,000, featuring cartoonists writing jokes (including some really bad ones) about politicians and current affairs, mocking everyone from Jesus to Sony to Obama on down could provoke a cold-blooded mass murder in the name of a religion.

You don’t know Charlie Hebdo, why would you? You may not like Seth Rogen, he’s not to everyone’s taste.

So must we take it to the mat for Seth Rogen and Charlie Hebdo? Yes, we must.

We cannot back down. We cannot be cowed. We can never allow murderous thugs who have hijacked an entire religion to undermine the values on which we have built an entire raucous, raging, unruly and free democratic society.

We must believe that Islam is strong enough to withstand criticism. Therefore we must support and encourage Muslims who love their religion and believe that freedom of expression can live alongside it.

We cannot be less courageous than the Muslim freedom warrior Mulala Yousafzai, who would not be cowed by the crazy radicals opposing female education.

We cannot be less courageous than the unsinkable Salman Rushdie, who lived for decades under the threat of fatwa and kept his sense of humor.

We have to remember that the Egyptian Jon Stewart – Bassem Youssef – lost his on-air show because of the dangerous political climate.

News organizations like CNN and The New York Daily News backed away on Wednesday from showing the Charlie Hebdo images that provoked al-Qaeda (or someone like them.)

I hope that does not stand. Now is not the time to let our choices be dictated by fear. The only way to beat back the crazy radicals is for everyone to stand up and be counted.

We must be intolerant of intolerance. We must choose this moment to continue to publish and print and film. It is the force of our collective determination that will allow tolerant Islam to raise its voice, and to shut out the tiny minority of violent extremists.

What’s more, if we don’t live our values, we don’t deserve to have them.

As the murdered editor of Charlie Hebdo, Stéphane Charbonnier, who was threatened and firebombed before by extremists said. “We can’t live in a country without freedom of speech… Without it we’re dead.”