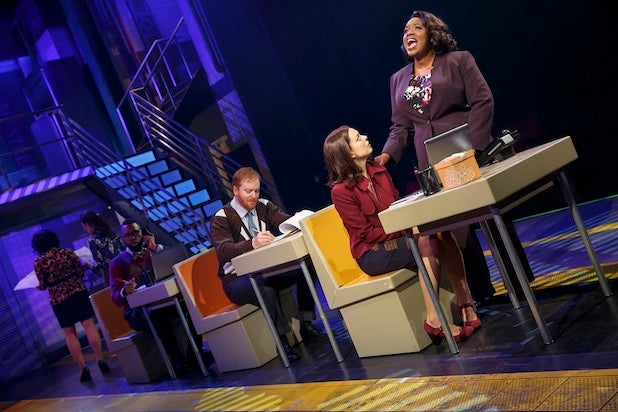 It’s appropriate that theatergoers take a down escalator to enter the Circle in the Square, the underground venue where the new musical “In Transit” opened Sunday. After escaping the subway to get to the Circle, you then confront a replica onstage of the Lexington Avenue line. That feeling of discomforting familiarity never fully leaves.

“In Transit” is not the first subway musical to grace Broadway. The more provocatively titled “Subways Are for Sleeping,” written by Jule Styne, Adolf Green and Betty Comden, opened in 1961, enjoyed a very brief run, and tells the story of a journalist reporting on the homeless who live underground.

“In Transit” is about working New Yorkers who ride the subway. The homeless, frankly, are much more interesting — at least when compared to this middle-class gaggle: an actress doing temp work (Margo Seibert), a financial type losing his job (James Snyder), a woman recovering from a romantic break-up (Erin Mackey), and a gay couple looking to get married (Justin Guarini and Telly Leung being real prissy).

Late in the show, somebody does relieve himself upstage on the subway platform, but otherwise this is not only a crime-free but a drama-free zone. Whether above ground or below ground, the “In Transit” characters lead one to re-title the show “Theaters Are for Sleeping.” Life here is so sanitized that the subway musician known as Boxman (Steven “HeaveN” Cantor brilliantly replicates the screech and squeal of the train cars) never asks for a dime, gives sage advice, and swipes his MetroCard for those passengers less fortunate.

“In Transit” bills itself as Broadway’s first a capella musical, written by Kristen Anderson-Lopez, James-Allen Ford, Russ Kaplan and Sara Wordsworth. The American Federation of Musicians may not be happy, but it’s no small achievement that the four writers responsible for the book, music and lyrics succeed in not making us miss having an orchestra. Credit there also goes to the a capella arrangements of Deke Sharon. Maybe fewer arrangements for soloists would be better. Rarely does someone sing without a chorus going “doo-doo-doo-dah,” followed by “doo-doo-doo-wah,” with an occasional “dee” or “woh” thrown in for variety.

The score features ballads, gospel, hip-hop and rap, but the arrangements make most of the tunes sound like doo-wop. Vocally, the standout is Nicholas Ward, whose bass belongs at the Met Opera. Also extraordinary is Moya Angela, who gets to deliver the show’s only truly funny song, “A Little Friendly Advice.” Angela is the big black lady who sings gospel late in the show a la “Hairspray,” “Violet,” “Memphis” and many other recent Broadway musicals. In this case, Angela brings down the house, but not because she’s so inspiring to white people. On the contrary, she plays the boss who tells the actress-temp to get a real life and stop following her silly dream of a life in the theater.

Otherwise, the show’s humor relies on making fun of brand names like Redbull and Pfizer and the trials of riding the subway, especially on weekends. The many vignettes are written without zingy exit lines to get the actors off the stage. Kathleen Marshall, who directs and choreographs, takes care of that book deficiency by having a conveyor belt stand in for the subway. It whisks the actors off stage in no time.