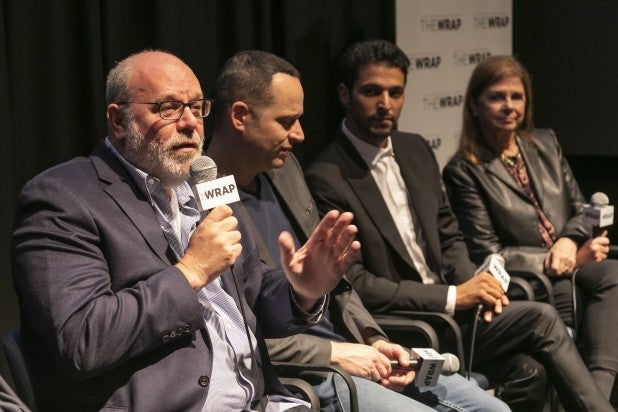 When filmmaker Yaron Zilberman told Dalia Rabin that he wanted to make a film about her father’s death through the eyes of his assassin, she wasn’t sure how to respond.

“At the beginning, I was quite skeptical, and even a little shocked by the idea,” said Rabin, whose father, Yitzhak Rabin, was assassinated in 1995 by a Jewish extremist during his second term as Israel’s prime minister. Luckily, she knew of Zilberman’s work, and gave her blessing to the project that became “Incitement.”

The Israeli drama, which screened as part of TheWrap’s Awards Screening Series, follows the assassin, Yigal Amir, in the year leading up to the murder, as he becomes obsessed with the idea of killing the prime minister, egged on by the ultra-nationalist rhetoric of politicians and religious leaders.

“Rabin’s assassination is a national trauma for [Israel] and also a personal trauma for each of us who were part of the pro-peace movement,” Zilberman told TheWrap. “Only the assassin could lead us through the journey of what actually led him to do it,” he said.

Zilberman and co-writer Ron Leshem struggled with how to tell Amir’s story without depicting him as a hero, and relied on a variety of techniques — a claustrophobic aspect ratio, unflattering angles of the protagonist and droning musical cues — to discourage the audience from identifying with him.

“There’s a lot of music in this movie…but there’s no melody. Usually, when you have a melody, it’s associated with a hero, so I tried to avoid that,” said Zilberman. “I used all of these cinematic tools in order to try to suppress the identification, but still I know there’s some of that, and I’m okay with taking that risk,” he said.

By setting the film against the backdrop of the prime minister’s efforts to end the Israeli-Palestinian conflict, the filmmakers were able to tackle themes of nationalism, religious orthodoxy and the cultural divides that permeate their country.

“It was clear we’re not really doing a movie about 1995. We’re doing a movie about today, Israel today and the future of Israel,” said co-writer Ron Leshem. The movie relies on newsreel footage, including footage of current Prime Minister Benjamin Netanyahu, then leader of a right-wing political party, strongly criticizing Rabin’s pro-peace efforts.

“Incitement” premiered at the Toronto International Film Festival and was condemned by Israel’s culture minister Miri Regev after it won the best film picture prize at the Israeli Academy of Film and Television’s Ophir Awards in September. Regev said the film had “no place” in the country due to its perceived criticism of Netanyahu.

“People who are you see here as the most extreme, bizarre people…are now completely mainstream members of the Parliament. So we felt like we had a mission,” said Leshem.

“I think the message for me is the importance of each one, each individual,” said Zilberman. “One should always keep track of the morals of society, and when you hear politicians say inflammatory words, just to totally reject it, call it by its name, say that we’re not going to accept it. We’re not going to vote for people who talk like that,” he said.

Dalia Rabin, who was also the guest of honor at the film’s Toronto opening, said she was satisfied with the final product. “I thought it was a wonderful film. I also think it’s a document, and it’s so well done that it attracts a lot of people,” she said.

The director remembered the actor who plays Yigal Amir, Yehuda Nahari Halevi, running to hug Rabin after an initial screening.

“That was the first moment I truly realized that I am portraying the guy who killed her father,” said Nahari Halevi. “I was crying and I came to her and hugged her, saying, ‘it wasn’t me, it wasn’t me.’ And she said, ‘I know it wasn’t you, but thank you very much for doing this.”

“Incitement” is lined up for U.S. release on Jan. 24, 2020 after scoring a deal with WestEnd Films and Greenwich Entertainment last month. The film is also Israel’s choice to vie for the international feature film Oscar.