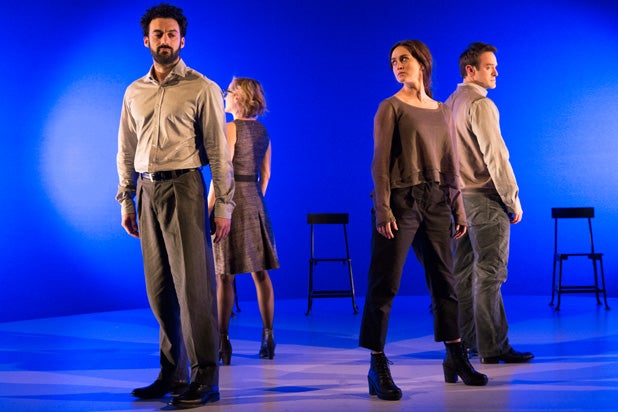 A more apt title for Nick Payne’s new play “Incognito” would be “The Story of Two Brains.” The British playwright’s follow-up to his hugely successful 65-minute sliver of an acting exercise “Constellations” opened Tuesday at MTC’s City Center Stage 1. As titles go, “Incognito” is so slylishly enigmatic, and tells us next to nothing.

Also not helpful are the gerunds that make up the titles of the three acts — “Encoding,” “Storing,” and “Retrieving” — even though Payne’s play is only 85 minutes. Scott Pask’s set design — a bare circular stage and cyclorama — telegraphs from the get-go that we’re in for a deep night in the theater.

Who would suspect that one half of “Incognito” is a mash-up of plots from a few Joan Crawford movies: an amnesiac musician can no longer play the piano, but miraculously performs again when united for the first time with his long-lost child, now an adult?

It’s sentimental, but it’s doubtful Payne wants to be saccharine. “Incognito,” like “Constellations,” wears its intellectualism on its sleeve, meaning the play is pretty middle-brow stuff. Payne is expert at dropping enough physics into his plays to fool theater critics who majored in Elizabethan drama into thinking he’s being profound.

The other half of “Incognito” is about Albert Einstein. Well, Albert Einstein’s brain, to be exact. Payne bases both stories on real-life events. Einstein’s brain was dissected and kept by Dr. Thomas Harvey, and a granddaughter, Evelyn Einstein, had reason to believe she might be the genius’ daughter instead. She asked for DNA testing.

Einstein connects with the amnesiac pianist because doctors in both stories want to examine the respective brains after death. Payne seems to be saying that such research is folly. A character quotes Einstein: “Imagination is more important than knowledge. Knowledge is limited.”

Which is much better than the lines Payne thinks up to give his characters: “Having to remember keeps us locked into a particular mode of behavior,” or “Exactly as we have mapped the cosmos, we now need to map out the human brain.” Heavy.

In telling his two stories, Payne jumbles the events, keeping us in the dark about the characters’ various relationships for most of “Encoding” and “Storing.” The result is that the third act, “Retrieving,” comes chockablock with aha moments of resolution that don’t illuminate much of anything. The fractured structure merely obscures to allow for delayed and meaningless dramatic surprises.

Playing multiple roles, only Morgan Spector manages not to overact. Payne’s structure almost demands exaggerated performances from Geneva Carr, Charlie Cox and Heather Lind. We come to differentiate the characters by their various accents, which range from British to a Midwestern twang.

Few scenes last more than three minutes, and just when the action begins to take off, Payne switches to another story. Often, this approach finds an actor having to segue almost mid-sentence from playing a confused lesbian girlfriend to playing a dying pregnant wife, from asking noisy questions (one guy is a reporter) to having an epileptic seizure.

Doug Hughes’ direction includes a peculiar tic. Before each of the three acts, the actors strut the stage making weird gestures to an overamplified soft rock score by David Van Tieghem. It’s like watching a bunch of middle-age fogies try to mimic Madonna‘s “Vogue” video.