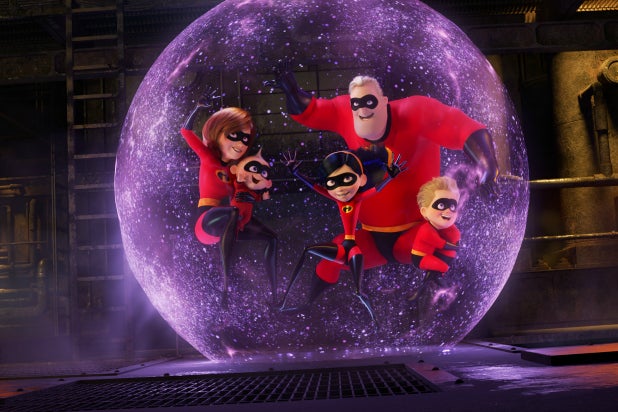 The reviews are in for “Incredibles 2” and some critics say it is the best superhero movie to date.

“Prior to this latest effort, Brad Bird made what can unequivocally be called two of Pixar’s best movies,” said CinemaBlend’s Eric Eisenberg. “Now that statement can be updated to say that he’s made three of Pixar’s best.”

The Epoch Times’ Mark Jackson wrote, “‘Incredibles 2 is not only one of Pixar’s best movies ever, but also arguably one of the greatest superhero movies ever made.”

Also Read: 'Incredibles 2' Film Review: Pixar's Superhero Family Is Back, Baby - and What a Baby

TheWrap’s Robert Abele wrote, “here comes ‘Incredibles 2’ to save the day, the weekend, your summer, and maybe even your Marvel/DC/superhero fatigue.”

All in all, reviewers have given the sequel a 96 percent on Rotten Tomatoes. Most of the critics praised the animation, the score and the action, and lauded Bird for being able to pick up right where the original left off 14 years ago.

See 7 of the best reviews below.

“‘Incredibles 2’ overflows with ideas–the characters engage in philosophic debates during chase scenes or even while brushing their teeth–while retaining the stylistically spare and refined visuals that made the original film so refreshing. This is the rare sequel that packs constant surprises while still delivering on expectations… Like ‘Black Panther’ earlier this year, ‘Incredibles 2’ is a reminder of what a collective joy it can be when a filmmaker with a singular vision and purpose makes a film of boundless scope and budget.”

“Perhaps most intriguingly, ‘Incredibles 2’ is both pop-culture eye candy and a sly critique of it — albeit one delivered in the form of the bad guy, who rails against the mediation of screens as a poor substitute for unfiltered life experience. I don’t need to tell you who wins here, but it’s refreshing to see a movie sequel that can question its own existence, even as it revels in it. (A movie theater marquee advertises ‘Dementia 113’ in the background of one shot, a sight gag that evokes the kind of throwaway joke you might see on ‘The Simpsons,’ for which Bird once worked.) It’s been a long time coming for ‘Incredibles 2,’ but the punchline is worth the setup.”

“Prior to this latest effort, Brad Bird made what can unequivocally be called two of Pixar’s best movies. Now that statement can be updated to say that he’s made three of Pixar’s best.”

“It’s good — funny, smart and contemporary. By definition it can’t be as groundbreaking as the first film, but never does it feel like a cash grab. The action is once again astounding, as is the animation. There are plenty of laughs. Without revealing too much, Jack-Jack and Edna Mode (Bird) steal a lot of the scenes.”

“The movie takes about 10 minutes for the pace and excitement to get rolling, but when it does, it’s an, ahem, incredible ride–the type that keeps you on the edge of your seat consistently throughout the movie. That’s a major accomplishment. ‘Incredibles 2’ is not only one of Pixar’s best movies ever, but also arguably one of the greatest superhero movies ever made.”

“Brad Bird’s ‘Incredibles 2’ is, much like its predecessor, delightful as an animated feature but really, really delightful as a superhero picture. It’s proof that someone (not anyone, mainly Bird) can make a Marvel-type movie that’s fleet and shapely, with action sequences rich in style rather than tumult. He’s a crackerjack filmmaker first and a marvelous animator a close second, and he has made the jazziest hybrid in years.”

“Pixar doesn’t have the greatest track record when it comes to sequels, but this follow-up surpasses most everything without ‘Toy Story’ in the title. The animation is stellar and detailed in excellent action sequences, Michael Giacchino’s score swings harder than ever, and the first film’s family-friendly warmth is just as appealing now as it was then, even if ‘Incredibles 2’ isn’t totally incredible itself.”

Samuel L. Jackson is reprising his role as John Shaft in "Shaft", which comes out this Friday. Scroll on to discover some little-known facts about the acclaimed actor. Trust us when we say: You'll likely be surprised by at least one of them.