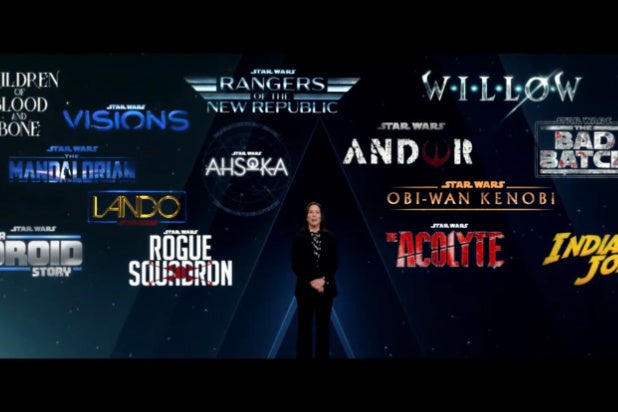 A prominent director of some beloved Disney films is throwing shade at the mass media conglomerate for the massive pile of “Stars Wars” announcements made during its investor call on Thursday.

Brad Bird, who directed wildly popular animated films for the company including “The Incredibles” and “Ratatouille,” made a cheeky joke on Twitter about the value of coming up with original ideas.

Quoting a tweet from movie publication Lost in Film featuring a picture of director George Lucas and star Mark Hamill, A.K.A. Luke Skywalker, on the set of the original “Star Wars” in 1977, Bird quipped, “Yep. They made a brand new idea back then. LOVE that.”

Yep. They made a brand new idea back then. LOVE that. https://t.co/lFmpCdEhhC

The joke is that Disney has announced so many spin-offs and iterations of the ever-popular (and 43-year-old) “Star Wars” franchise, instead of cultivating much in the way of new IP. During the Disney Investor Day live stream, the company announced no less than 10 new “Star Wars” series to come over the next few years after the success of “The Mandalorian” and its Baby Yoda character.

Among the newly announced series are a pair of “Mandalorian” spinoffs — “Ahsoka” and “Rangers of the Republic — and the three shows will all converge for a crossover next Christmas. They also announced a new movie, called “Rogue Squadron,” out by Christmas 2023 to be directed by “Wonder Woman” director Patty Jenkins.

It’s a curious sentiment for Bird to express given his close associations with Disney in the past, including writing and directing “Incredibles 2,” which was released just two years ago. It’s pretty rare for those within the Disney ecosystem to make this sort of dig at the megacorporation openly.

The first “Star Wars” film was released in 1977, followed by the sequel “The Empire Strikes Back” in 1980 and “Return of the Jedi” in 1983, completing the original trilogy. Countless other spinoffs of the series have been made since then, including the prequel trilogy consisting of 1999’s “Episode I: The Phantom Menace,” 2002’s “Episode II: Attack of the Clones,” and 2005’s “Episode III: Revenge of the Sith.”