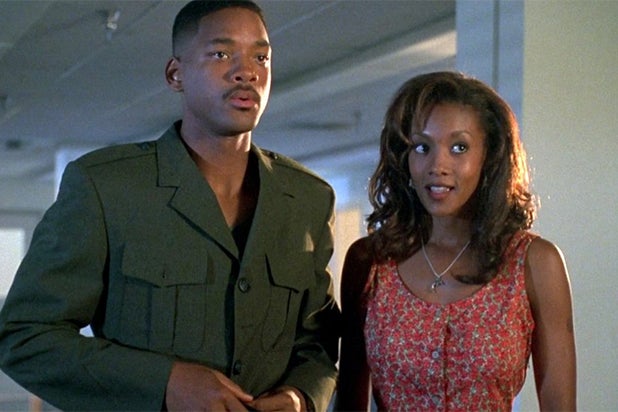 Spoiler alert! Do not read unless you’re curious how the filmmakers explain Will Smith‘s absence from “Independence Day: Resurgence.”

War of 1996, a new viral marketing site for the upcoming sequel, provides a detailed timeline of what happened on earth after the attempted alien invasion in the first film.

In an entry dated April 27, 2007, we learn that Hiller died while testing a new piece of alien technology, which humans have adapted as part of a new global defense network.

“While test piloting the ESD’s first alien hybrid fighter, an unknown malfunction causes the untimely death of Col. Hiller. Hiller’s valor in the War of ’96 made him a beloved global icon whose selfless assault against the alien mothership lead directly to the enemy’s defeat,” the entry reads. “He is survived by his wife Jasmine and son Dylan.”

Vivica A. Fox will return to play Jasmine, while Jessie Usher will portray Dylan. Director Roland Emmerich revealed earlier this year why Smith would not be returning in an interview with Cinema Blend.

“In the very beginning, I wanted to work with him and he was excited to be in it,” Emmerich said. “But then after a while he was tired of sequels, and he did another science fiction film, which was [‘After Earth’], so he opted out.”

Several stars of the original film will return for the sequel, including Bill Pullman, Jeff Goldblum, and Judd Hirsch. New stars include Liam Hemsworth, Maika Monroe, and Joey King.

“Independence Day: Resurgence” will open in theaters on June 24.