With the release of the first trailer for “Indiana Jones and the Dial of Destiny,” speculation and theories are already in high gear. But director James Mangold is already getting tired of where some of that “Indiana Jones 5” speculation has been going.

In a since deleted Twitter thread, Mangold — who took over directing duties from Steven Spielberg on the new “Indiana Jones” film — responded to a fan asking about rumors that Phoebe Waller-Bridge, who plays Indiana Jones’ goddaughter Helena in the upcoming summer blockbuster, would be replacing Harrison Ford as the lead in the franchise with “Dial of Destiny” serving as a passing of the torch (or hat and whip, as it would be).

The “Logan” and “Ford v. Ferrari” filmmaker’s response was swift and sharp: “One more time. No one is ‘taking over’ or replacing Indy or donning his hat nor is he being ‘erased’ thru some contrivance,” Mangold wrote. “And he never was, not not in any cut or script — but trolls will troll — that’s how they get their clicks.” 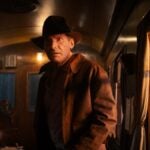 The director went further, calling out bad faith tweeters who spread rumors based on nothing but conjecture to gin up outrage.

“Please don’t exhaust me pointing out how once in a while a troll is ‘right.’ Even a blind squirrel finds a nut now & then. All one has to do is look at set photos & interviews & you get enough info to make wild guesses about a movie plot,” he wrote. “The diff between trolling a-holes & everyone else is they are trying to make [money] off your feelings about other films & culture war politics.”

“Indiana Jones and the Dial of Destiny” is set to be the 80-year-old Ford’s final turn in his most famous leading role, and the first time he will do so without Steven Spielberg directing or George Lucas having story credit.

Mangold is director and co-writer on the film, which is set in 1969 as Indy teams up with Helena to take on Jurgen Voller (Mads Mikkelsen) an ex-Nazi now employed by NASA who wishes to use the moon landing and a mysterious artifact to shape the world as he sees fit. The film will also have a score from legendary composer John Williams, who scored all four previous “Indiana Jones” films.