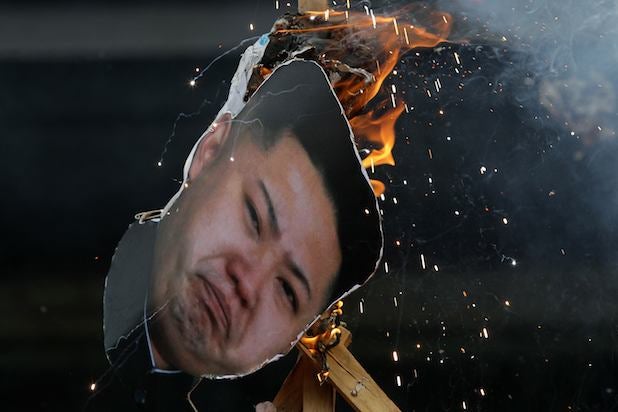 A multinational group of activists has launched an Indiegogo campaign to raise $10 million to fund a coup in North Korea, the country linked by the FBI to last year’s cyber attack on Sony Pictures Entertainment.

Freedom Now plans on building a covert, rebel communication network within the country ruled by dictator Kim Jong-un in hopes that it will allow defectors to plan a Democratic revolution.

The group says the money raised will be split between communication technology, education materials, intelligence gear, travel expenses and government bribes. As of publishing, no one has pitched in a single dollar since Sunday’s launch of the campaign, which ends on Mar. 19.

Rewards, a staple of Indiegogo’s approach to crowdfunding, range from certificates “thanking you for your service” and bumper stickers to “sole ownership of all of the media files collected during the extent of the film project” — if you can kick in $1.1 million to back it.

The campaign founder, operating under the alias “Andrew Fox” in fear of the “blood-thirsty dictator” Freedom Now is attempting to overthrow, wrote that the group will not provide any specific information on the communication network for “security reasons.”

“There are already North Korean generals and military commanders with a strong willingness to join an effort in bringing freedom to North Korea, as well as millions of North Korean citizens,” the campaign’s message to supporters reads. “The major obstacle for these individuals is knowing who else is out there with the same desire as well as who they can trust.”